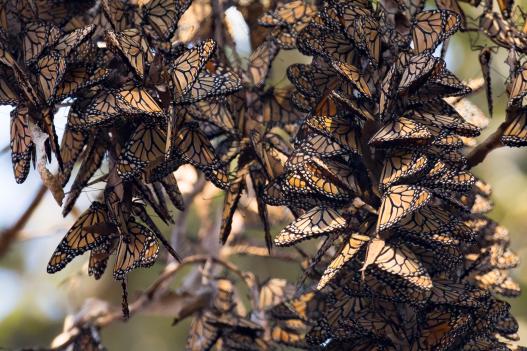 Both populations have suffered significant declines since the mid-1990s, leading to petitions to list the species under the Endangered Species Act. Factors contributing to the decline vary widely across the vast area used by the species, but primary causes are believed to be loss and degradation of breeding and feeding habitat, loss of overwintering habitat, use of pesticides, impacts of climate change, disease, parasites, and predation. Monarchs’ high degree of dependence on milkweed and other nectar-producing plants makes them particularly vulnerable to changes in habitat due to the ongoing conversion of grasslands and farming practices that eliminate all non-crop plants.

In an effort to reverse the population declines and preclude the need to list the species, federal and state conservation agencies across the species’ range have partnered with non-governmental organizations to develop and implement conservation strategies for both populations. A Monarch Joint Venture was formed, and a Mid-American Monarch Conservation Plan was adopted by the Midwest Association of Fish and Wildlife Agencies last June. Earlier this month, the WAFWA Monarch Working Group presented their final Western Monarch Conservation Plan to agency directors at their mid-winter meeting in Tucson, AZ. The directors unanimously approved the document.

The Western Monarch Conservation Plan sets both population and habitat objectives. The population objective is to achieve a 5-year running average by 2029 of 500,000 monarch butterflies counted at 75 sites with the highest counts during the Western Monarch Thanksgiving Count. That would represent a near doubling of the most recent population estimate. Habitat-related goals include creating an additional 50,000 acres of monarch-friendly habitat in California’s Central Valley and adjacent foothills and establishing protection and management for 50% of all currently known and active Monarch overwintering sites, including 90% of the most important overwintering sites, by 2019. Achieving these goals may be somewhat easier in the Western than the Mid-American population range because the majority of the habitat in the Western range is public land.

Adoption of the Western Monarch Conservation Plan by the WAFWA directors is further evidence of the “all hands on deck” approach to reversing the downward trend in this species and many other pollinators. The geographic scale and complexity of the undertaking is equal to the challenges wildlife managers and policy-makers faced over a century ago when the need for continent-wide action spurred adoption of the Migratory Bird Treaty Act.