The USGS Arkansas Cooperative Fish and Wildlife Research Unit is leading new research on restoring prairie grasslands with prescribed burning in the Loess Canyons of Nebraska. Private landowners have used prescribed burning for nearly two decades to address the greatest threat to their working grasslands, the expansion of trees into grasslands (woody encroachment). This is the first study showing how long-term management across an entire region or ecosystem can reverse the impacts that trees have on grasslands and on birds that depend on intact, resilient, and tree-free grasslands. 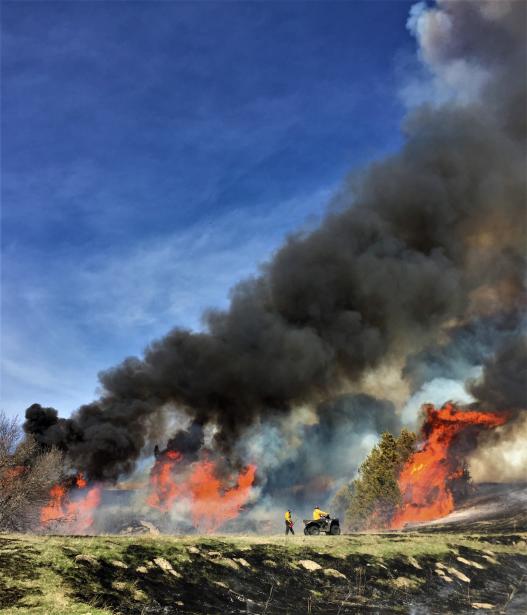 Grassland bird conservation is a key priority of a new Framework for Conservation Action in the Great Plains Grassland Biome developed by the Natural Resources Conservation Service’s Working Lands for Wildlife. Addressing large-scale threats, like woody encroachment, and building from measurable outcomes of conservation successes, like increasing numbers of bird species on landscapes, is a top priority to address grassland bird declines.

The researchers found that the number of grassland bird species increased across 65% (~222,000 acres) of the Loess Canyons, and woody plant cover decreased up to 55% across 25% of all fire-treated areas.

A forthcoming study in Ecological Solutions and Evidence demonstrates how prescribed burning has increased the number of grassland bird species found on privately-owned rangelands across most of this region. This research shows this decline does not have to be permanent and grasslands and species richness can be recovered through concerted, landscape-scale action. Research in the Loess Canyons and this research may inform future conservation projects.