A proposal for what would be the first freshwater wind farm in the Great Lakes is being considered by the State of Ohio’s Power Siting Board. This project, called Icebreaker Wind, would be only the second offshore wind project in the entire United States. The project was “paused” in 2017 to complete a review of the methodologies for baseline radar surveys of migratory birds and bats. On March 12, 2018, the U.S. Fish and Wildlife Service provided a draft Environmental Assessment and notified the Ohio Department of Natural Resources that the project poses limited risk of adverse impact to birds and bats, and is not likely to adversely affect any threatened or endangered species. In that same letter the Service found that Icebreaker’s proposal to use a large vessel as the radar platform had “the potential to contribute meaningfully to migratory bird and bat exposure data for the project.” A final environmental assessment is anticipated from federal officials in the next few months. A second local public hearing is set for July 19, 2018. 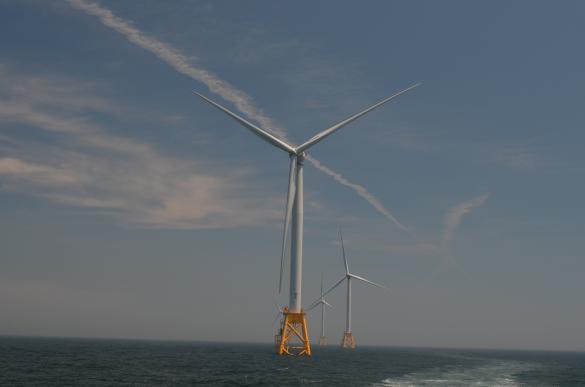 The developers would site six wind turbines approximately 8 miles north of Cleveland, Ohio in Lake Erie. Each turbine is up to 300 feet tall, with three blades that are each 176 feet in length. The project is expected to generate about 20 megawatts of electricity when completed. Electricity would be carried to shore via buried cable on the bottom of Lake Erie to the Cleveland Public Power substation on North Marginal Road. Construction is currently planned for Summer 2020 with the facility becoming operational in November 2020. The proposal has been submitted by the Lake Erie Energy Development Corporation of Northern Ohio, in partnership with General Electric Company and Fred.Olsen Renewables of Oslo, Norway.

Some renewable energy advocates hope Icebreaker Wind will catalyze further Great Lakes offshore wind development by settling economic, environmental and regulatory concerns. Opponents are concerned about potential impacts to fish and wildlife communities, as well as the aesthetics of windmills. Supporters point to the benefits of jobs and economic activity that an additional source of energy could bring to the region.

The United State Department of Energy (DOE) has given about $200 million since 2011 to various offshore wind research, development and deployment projects. In 2016, the Icebreaker project was awarded a $13.3 million grant and the opportunity to win two further $13.3 million development grants.

Offshore wind energy generation on the Great Lakes was a hot topic during the early 2000’s although the recession of 2008 slowed the interest in offshore development. However, onshore siting of windfarms continues at a fast pace in both the Great Lakes region and in the Great Plains.