The Wildlife Management Institute (WMI), with support from Montana Fish, Wildlife, and Parks (FWP), the U.S. Fish and Wildlife Service (FWS), the Helena – Lewis & Clark National Forest (H-L&CNF), the Interagency-Agency Grizzly Bear Committee (IGBC), and Vital Ground is expanding grizzly bear safety education and outreach in southwest Montana. WMI recently hired Sara Sylte to work in two areas that are vital to grizzly bear conservation: the lands between the Northern Continental Divide and Yellowstone ecosystems and along the southern Rocky Mountain Front. This new position will augment ongoing outreach in occupied grizzly bear range and focus on minimizing human-bear conflict in dispersal corridors and areas being recolonized by bears. 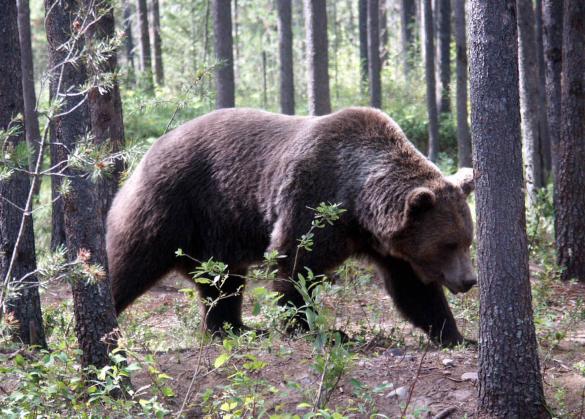 WMI Western Field Representative Chris Smith said, “The goal is to stay a few steps ahead of grizzly bears and help people take action to prevent conflicts as bears expand their range.”

Grizzly bears in the northern Rocky Mountains that were listed as Threatened under the Endangered Species Act in 1975 are recovering in response to coordinated efforts by state and federal agencies, tribes, private landowners and citizens. Bears have increased to the point where the population in the Yellowstone Ecosystem, estimated to be in excess of 760 bears, was delisted in 2017. The Northern Continental Divide Ecosystem population, estimated at over 1,000 bears, may be proposed for delisting this year. As these populations grow, the potential for human-bear conflict increases, especially in areas being recolonized by bears where people have not had to think about living with grizzlies for several generations.

FWP, the Confederated Salish and Kootenai Tribe, and the Blackfeet Tribe employ grizzly bear management specialists who work in occupied grizzly bear habitat to address a broad range of human-bear conflicts. However, the demands on these specialists are such that, much of the time, they are reacting to problems after the fact.

To address the need for more proactive measures, in 2016 FWP joined with the Beaverhead-Deerlodge and Custer-Gallatin National Forests, the Wildlife Conservation Society, People and Carnivores, FWS, and WMI to form the Southwest Montana Bear Education Working Group. With financial support from working group members, other foundations and non-government organizations, WMI hired a coordinator to organize and implement additional outreach to communities, landowners, and individuals across grizzly bear range in southwest Montana. Over the past two years, the Southwest Montana Bear Education Program has reached over 35,000 people with messages about how to live, work, and recreate safely in grizzly bear range. Along with increasing human safety, the program helps build understanding and social tolerance that are critical to bear conservation.

Given the ongoing expansion of the grizzly bear population in Montana, managers have recognized the need to provide bear safety information in areas bears have not yet reached, but will likely recolonize in the foreseeable future. Along the Rocky Mountain Front, grizzly bears are moving back out onto the prairie into agricultural lands and among communities that have not seen grizzly bears in over 80 years. In addition, recent studies have identified potential movement paths for bears between the Northern Continental Divide and Yellowstone ecosystems. Minimizing human-bear conflict along these routes will promote dispersal of bears and genetic connectivity between these two populations.

Much of the area along the southern Rocky Mountain Front and in the connectivity zone between the NCDE and Yellowstone ecosystems falls within the H-L&CNF. Interspersed among national forest lands are communities ranging from small towns like White Sulphur Springs to the state capital, Helena, as well as rural subdivisions and cattle ranches. Forest biologist Denise Pengeroth, FWP Wildlife Division Administrator Ken McDonald, and FWS Ecological Services Supervisor for Montana, Jodi Bush have all wanted to extend human-bear conflict reduction efforts to this complex landscape. Now, with funding provided by FWP, FWS, the H-L&CNF, the Interagency Grizzly Bear Committee and Vital Ground, WMI has hired someone to fill that need.

Sara Sylte grew up on a ranch northwest of Helena, is a wildlife biologist with a master’s degree, and has prior experience with both the H-L&C and FWP. WMI was pleased to be able to bring Sara on board to help with outreach efforts.  Smith concluded, “Sara’s professional training and her background coming from a Montana ranching family are the perfect combination for this area. Her work will be a valuable complement to the ongoing efforts of all the partners collaborating to promote human safety and grizzly bear conservation in Montana.”