Natural resource agencies, and state and local governments, are challenged to respond to an increasing number of flooding disasters. The Army Corps of Engineers reported the Great Lakes are expected to continue setting water level records in some areas this summer, a result of historic rainfall and warm weather that also fueled dam failures and widespread flooding in the Midwest. Among the headlines during the past month was a story about the city of Midland, Michigan having major flooding issues due to the failure of a dam upstream, impacting thousands of people and businesses. Last year the headlines were filled with flooding stories of the upper Mississippi River, which was above flood stage for 85 days in Dubuque, Iowa. In 2018, the geographic area was the Missouri River drainage. 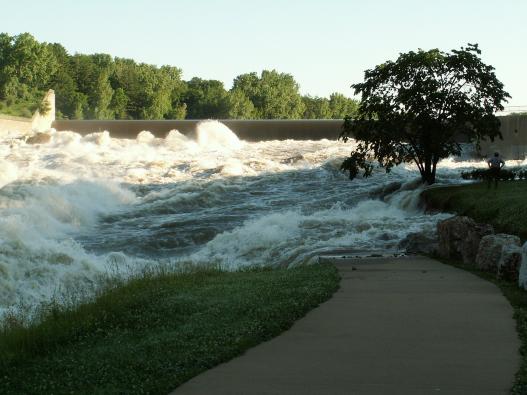 So what is going on? Heavy downpours are increasing nationally, especially over the last three to five decades (also see Kunkel et al. 2013). The heaviest rainfall events have become heavier and more frequent, and the amount of rain falling on the heaviest rain days has also increased. Since 1991, the amount of rain falling in very heavy precipitation events has been significantly above average. This increase has been greatest in the Northeast, Midwest, and upper Great Plains – more than 30 percent above the 1901-1960 average. There has also been an increase in flooding events in the Midwest and Northeast, where the largest increases in heavy rain amounts have occurred.

Much of the country’s waterway infrastructure (dams, levees, etc) is aging. A majority of the roughly 90,000 dams in the United States are older than their nominal design life of 50 years, the point when they become increasingly more difficult and expensive to keep safe. The National Inventory of Dams includes about 25,000 dams considered high or significant hazards if they failed.

Most importantly, this infrastructure was designed to meet the demands of precipitation factors when first constructed decades ago. Few are prepared for the new probabilities of extreme weather events, either in magnitude, frequency, or duration. In addition to flooding of homes and businesses, many critical services such as water treatment plants, wastewater treatment plants, and electricity-generating plants, are located near waterways. Richard Norton, a professor of urban and regional planning at the University of Michigan, said extreme weather events in older cities like Midland, Michigan, “Highlight how much added risk we’re facing because of our industrial past, which placed so many high-risk critical facilities and high-contamination industrial sites so close to waterways now at increased risk of flooding. It’s a double whammy.”

The COVID-19 pandemic has raised our collective awareness of the need to be prepared for large scale disruptions to our way of life. While you may think about flooding as a localized event, the disruptions caused by flooding of major waterways (e.g. Mississippi and Missouri) and their tributaries are landscape level and may be felt in states distant from the weather events that triggered the flooding. As our decision-makers look to make critical investments in infrastructure, it would be wise to appropriate resources to assess and deal with aging dams and levees.