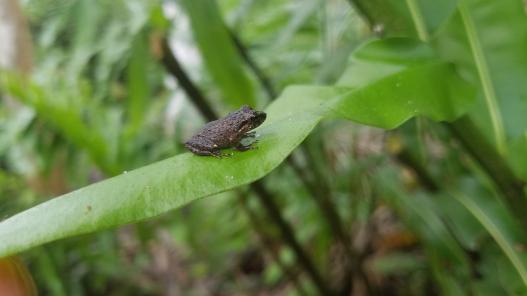 Each night as the sun sets in Puerto Rico, the rainforest erupts with the chorus of coqui species, a suite of 17 diminutive tree frogs of the genus Eleutherodactylus. These small amphibians get their name from the two-note “co-quí” call that male frogs of the most widespread species make, but these creatures are known for so much more than their distinctive tunes. Coquís are a national symbol of Puerto Rico and represent the health and wellness of the island’s ecosystems. In addition to their cultural importance, this suite of animals also plays a critical role in energy transfer among the island’s tropical ecosystems through nutrient cycling and food webs, making them a conservation priority for management agencies on the island.

Changes in climate and land use, such as increased urbanization, pose a significant threat to the long-term resilience of the coquís and other species on the island. The conservation community must make important climate change adaptation decisions impacting the health of important natural resources and ecosystems. However, a lack of scientific guidance and information has complicated these efforts.

To address this need, researchers from the NC CRU and SE CASC have worked closely with management agencies on the island, specifically the U.S. Fish and Wildlife Service (USFWS) and the Puerto Rico Department of Natural and Environmental Resources (DNER) to produce actionable research that can inform conservation decisions. What began as an effort to produce reliable climate change projections for the region has evolved into a remarkable three-part research effort that applies this knowledge to the conservation of at-risk species and populations.

The Southeastern Regional Assessment Program (SERAP) began creating high-resolution climate change projections for the southeastern U.S in 2009 and expanded in 2011 to include the U.S. Caribbean. This work developed more detailed climate projections for the region using a method known as statistical downscaling. Puerto Rico, however, is unique - it is a large island encompassing diverse landscapes with significant changes in elevation, meaning that the downscaled climate data was still too broad to be useful for representing smaller-scale climate features important to ecosystems, species of concern on the island, and decision making.

With this in mind, a 2013 SE CASC-funded project kicked off with a meeting convening stakeholders and scientists in San Juan, Puerto Rico to determine the most valuable types of information that would aid climate adaptation decision making. The researchers used these conversations to develop a suite of high-resolution dynamically downscaled climate projections for Puerto Rico, laying the foundation for more reliable climate change information for the region. Dynamical downscaling projects large-scale climate drivers to regional and local scales which provided more relevant climate information than the broader statistical modeling approach. The team then hosted a workshop with ecologists, hydrologists, and conservation biologists to familiarize the scientists with the dataset so they could effectively use the projections in their work. These projections continue to aid the development of adaptation strategies by the DNER and the USFWS.

Once researchers understood the projected temperature and precipitation changes for the region, the next phase of research asked the question: “How can these downscaled climate projections be applied to the conservation of biological resources on the island?” A stakeholder meeting with the USFWS, DNER, and U.S. Virgin Islands identified coquí frogs as a group of concern and research was initiated to help prevent these “at risk” species from becoming threatened or endangered. The team recently completed Phase 1 of this project that investigated the eco-physiological limits of four species: the Melodius coquí (E. wightmanae), Grass coquí (E. brittoni), Red-eyed coquí (E. antillensis), and Common coquí (E. coquí.) Researchers assessed the animals’ ability to acclimate to climate change impacts, known as adaptive capacity, by relocating the species to new habitats (translocations) and identified climate refugia, or areas that would be relatively buffered from the effects of climate change, to ensure the persistence of the species. Phase 2 of this research is currently underway to develop a plan of action to aid the recovery of two currently endangered coquí species and to support the persistence of 14 other coquí species.

This sequential USGS-supported research effort represents the intersection of publicly funded science for issues that are directly affecting highly valued natural resources and local cultural heritage. Through a co-production of science model, in which researchers involved stakeholders in all aspects of the work, the team was able to create foundational climate data for Puerto Rico and evolved to provide essential criteria for conserving the genetic diversity of the coquí and address multi-objective challenges in conservation management decision making.

The ONB features articles from U.S. Geological Survey Cooperative Fish and Wildlife Research Units across the country. The Units are leading exciting, new fish and wildlife research projects that we believe our readers will appreciate reading about. This story was written by Ashlyn Shore, Science Communications Specialist, Southeast Climate Adaptation Science Center.