Three diverse partnerships are promoting sustainable environments and communities across Alaska and northwestern Canada. The Aleutian-Bering Sea Initiative (ABSI) and Northwest Boreal Partnership (NWBP) are successors to Landscape Conservation Cooperatives (LCCs) established in 2011. Along with the Western Alaska LCC (WALCC) these partnerships have continued to operate, with support from the Wildlife Management Institute (WMI), the Alaska Conservation Foundation (ACF), and Volgenau Family Foundation following the withdrawal of support for LCCs by the Department of the Interior (DOI) in 2017. ABSI, NWBP, and the WALCC continue to contribute vital information and conservation products for their members. For example, ABSI designed Geo-fences in Alaska’s arctic marine waters in partnership with industry, agencies, and tribes to help redirect shipping to protect vital marine mammal habitat and reduce the risk of vessel grounding, oil spills, or illegal entry into Alaska. The NWBP published Drivers of Landscape Change in the Northwest Boreal Region, a comprehensive synthesis of the science related to resource management and climate adaptation across 1.3 million square kilometers in Alaska and northwest Canada. The WALCC is facilitating collaborative projects to mitigate the impacts of sea level rise, loss of permafrost, and changing ice dynamics on critical migratory bird habitat and communities along Alaska’s west coast. Steering Committees from the three partnerships met recently in Anchorage to develop strategies to seek programmatic funding to support the collaboration essential to landscape scale conservation across the region. 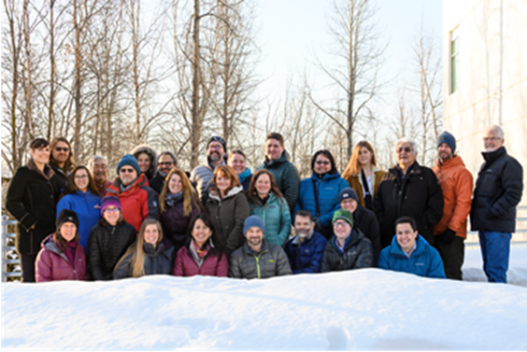 Increased collaboration is essential to address today’s conservation challenges. Migratory bird joint ventures and fish habitat partnerships were some of the initial mechanisms established to leverage multiple agency and non-government resources at a large scale. In 2010, the DOI launched a national network of 22 LCCs in an effort to expand collaboration to include all species and all organizations involved in conservation. Although some LCCs were less effective than others, and the DOI withdrew their financial and staff support for all LCCs in 2017, several of the partnerships established as LCCs have continued to function effectively. Among the latter are the ABSI, NWBP, and WALCC in Alaska, British Columbia, Yukon, and Northwest Territories. The impacts of climate change in the North are among the most substantial anywhere on earth, and these partnerships are vital to finding ways to help the environment, communities, and economies of the region adapt to a profoundly uncertain future.

Over the past few years ABSI, NWBP, and WALCC have expanded to include new collaborators, including additional Alaska Native and Canadian First Nations organizations. These new partners are adding important indigenous knowledge to Western science and increasing linkage of local communities with federal, state, and provincial agencies. ABSI also engaged the Department of Homeland Security by demonstrating the benefit of Geo-fences as a tool to help expand domain awareness relative to shipping in the Arctic marine waters of the United States. Thanks in part to connections made with the Sustainable Southeast Partnership, each of the partnerships is also now exploring connections to the for-profit sector to engage businesses in efforts to address a “triple bottom line” – People, Planet, and Profit.

The partnerships have had considerable success securing funding for projects. Recent examples include

Securing funding to maintain their day-to-day operations has proven more of a challenge for the partnerships. When the DOI ceased its support for LCCs, WMI and ACF stepped in to fund staff, travel, and basic office expenses and support the convenings of the Steering Committees which have proven to be so key for keeping the partnerships moving forward. A two-year grant from the Volgenau Family Foundation has been vital for the coordination of these three partnerships. Sustaining the partnerships in the future depends on finding other support.

The ABSI, NWBP, and WALCC Steering Committees met March 3rd and 4th in Anchorage to develop short- and longer-term strategies to address their funding needs. For 2020, the subcommittees will be seeking support from the U.S. Fish and Wildlife Service which received $12 million dollar this fiscal year to support landscape-scale conservation. The Congressional appropriations language makes clear that these funds are to be used to support the type of work these partnerships are conducting. In the longer term, the partnerships will explore ways to distribute the costs of coordinating their work more broadly among the public and private parties that benefit from their work.