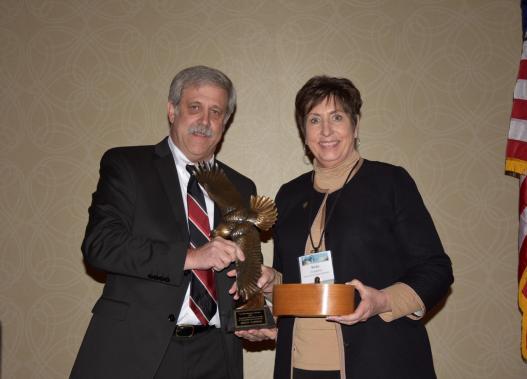 This award, established in honor of the widely acknowledged “Father of American Conservation” – George Bird Grinnell – is natural resource management’s highest individual honor and was presented by the Wildlife Management Institute’s President, Steve Williams. The award was established to honor a person who has dedicated their career to professional science, management, and conservation of natural resources and who has done so without fanfare or search for personal recognition.

In presenting the award, Williams noted, “This year’s recipient is known widely among those in the profession as a model of servant leadership and whose wisdom, vision, and ofttimes firm but fair nudge, reflect the highest qualities of the award’s namesake.”

After completing a degree in Wildlife Biology from Michigan State University in 1978, Humphries began her career 50 miles south of Lake Huron’s Saginaw Bay as a Program Leader for the U.S. Fish & Wildlife Service on the Shiawassee Wildlife Refuge.

“Becky possesses the type of leadership you can’t learn in school. Hers is a collage of hard work, life lessons learned, and above all else, integrity,” praised Williams. “Her patient and steadfast shepherding has left an indelible mark on North American conservation, as well as many of us.”

After 33 years of professional service to the Michigan Department of Natural Resources, Humphries became Director of Operations for Ducks Unlimited’s Great Lakes/Atlantic Region in 2011 before finally settling in her current role as Chief Executive Officer of the National Wild Turkey Federation.

“Through all this work, Becky has come to be regarded as a resolute and fierce defender of science as a foundation upon which to make decisions and frame policy,” concluded Williams. “Often described as resilient, tough, and not afraid to cuss when necessary, she is also treasured as a colleague who is smart, fair, and who always has your back. Becky is at the top of an elite list of stellar professionals who have dedicated their careers to North American natural resource conservation.”