Welcome to the 85th North American Wildlife and Natural Resources Conference. I want to thank all the state agency, federal agency, non-governmental organizations, businesses, industries, and exhibitors for your participation and financial support to make this conference successful. Thank you, Jim Douglas, for the welcome to Nebraska – a special place in the heartland of America. Finally, I would like to welcome Aurelia Skipworth, the new Director of the U.S. Fish and Wildlife Service. Aurelia, we are honored that you could make time in your busy schedule to participate in this conference. 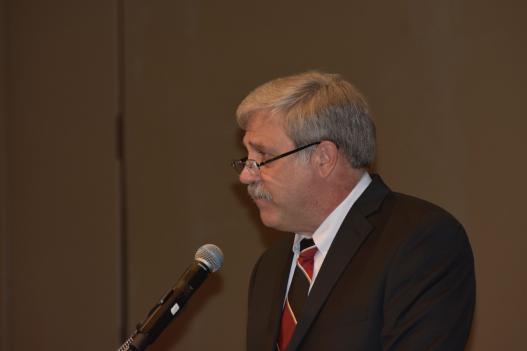 It has been a busy and productive year for WMI. We have conducted three separate state agency program reviews. The demand for these reviews has increased due to increased agency oversight and our unique perspective on agency strategic planning, organization, management, and program delivery. We currently administer 28 limited term employees for state agencies and organizations that have hit their full-time equivalency caps. These positions provide essential boots on the ground and require minimal administrative requirements for agencies. Last year, WMI staff participated in 34 national or regional conservation efforts. We remain a small, mobile organization that makes things happen. In the last 10-15 years, WMI’s staff of seven professionals has played pivotal roles in the development and current administration of the Young Forest Project, Fish and Wildlife Relevancy Roadmap, the National Hunting and Shooting Sports Action Plan, the Chronic Wasting Disease Alliance, the National Conservation Leadership Institute, the Interagency Grizzly Bear Committee, the Conservation without Conflict Coalition, and the Fish and Wildlife Business Summit. We are proud of the unique niche which we occupy in the professional conservation community.

This year conservationists celebrate the 30th anniversary of the Partners in Flight program. On the heels of establishing the North American Waterfowl Management Plan, Joint Ventures, and North American Wetlands Conservation Act, wildlife conservation leaders believed they could do the same for nongame birds. Partners in Flight was launched in 1990 to highlight the importance of nongame birds. The National Fish and Wildlife Foundation, state wildlife agencies, the U.S. Forest Service, a host of NGOs, and others provided strong leadership and support.

Partners in Flight was foundational to a movement that changed wildlife conservation in the United States. No longer were state and federal “nongame” programs relegated solely to bluebird nest boxes, backyard bird feeding tips, or bald eagle hacking programs. Instead the conservation of these birds helped all of us think about the application of conservation biology concepts – minimum tract size requirements, connectivity of habitats, and creative international partnerships. Birds are indicators of viable habitats and ecosystem health for other species and habitats under our stewardship.

Even as we celebrate Partners in Flight, we recognize there is also cause for concern and a renewed call for action. The paper published recently in the journal Science by Rosenberg, et al. documented the loss of 3 billion birds in North American in the last 50 years. This bird loss has captured the public's attention and generated 1,700 major news stories and front-page articles in major newspapers in the U.S. since October. This recognition may be the momentum building opportunity we need to push the Recovering America’s Wildlife Act (RAWA) over the top. Conservation biologists are developing the shovel-ready conservation plans for 25-50 at-risk bird species which is what the Blue Ribbon Panel envisioned with the RAWA legislation. Yes, it appears we have a crisis but we have a potential solution to that crisis.

Speaking of the Recovering America’s Wildlife Act, there are now 177 bipartisan co-sponsors in the House waiting for leadership to greenlight a full House floor vote. The bill passed out of the House Natural Resources Committee in December with a bipartisan 26-6 vote. RAWA is very close to a Senate bill introduction. Senate Majority Leader Mitch McConnell characterized the bill as “apple pie” and stated that this is one of the "things that I think we can do together.” I want to especially recognize Collin O’Mara, Jeff Crane, and Sean Saville for their leadership and work with the Alliance for America’s Fish and Wildlife. And, as a special bonus offer, if you act now, you can purchase t-shirts to raise funds and awareness to help pass RAWA. This is part of the kick-off of a social media marketing campaign aimed at new audiences who care about conservation. The t-shirts are available in the exhibitors’ area.

A few other notable achievements deserve mentioning. The passage of the P-R Modernization Act provides the needed flexibility for state agencies to use Federal Aid funds to promote our nation’s hunting heritage and to conduct the important work of the National Hunting and Shooting Sports Action Plan. We have a plan and now a potential for significant funding to carry out efforts led by the Council to Advance Hunting and the Shooting Sports. Finally, with the President’s and bipartisan congressional support, the Land and Water Conservation Fund may finally achieve full and permanent funding that is so essential for this vital land conservation program.

In preparation for this conference, I spent a few hours reviewing the last 35 years of North American Conference transactions. These transactions chronicle the current and emerging conservation issues of the times. Between 1985 and 2005, the transactions focused primarily on the understanding and management of wildlife and their habitats, including those programs and funding sources that support that work. During the last 15 years, the North American Conference has taken a more human-centric focus. Since 2005, the plenary and special sessions have explored the human dimensions of conservation, ecosystem services, leadership development, and the changing demographics of the human population. We have highlighted the importance of governance principles and public trust responsibilities. This change in focus was deliberate and in recognition of the need to make conservation more relevant to the North American public.

Today, our community has resolved to engage and serve a broader constituency. We have resolved to use strategies to break down barriers associated with agency culture and capacity, constituent culture and capacity, and political and legal constraints. The development of the Relevancy Roadmap, which was adopted by resolution last fall at the Association of Fish and Wildlife Agencies annual meeting, is a monumental leap forward for our profession. This action, coupled with a renewed effort and strategic plan to enhance our hunting heritage, has positioned our profession as never before. We recognize that adaptive change is necessary while also recognizing the importance of strengthening our connection with our traditional constituents. The future looks much brighter than before.

After 35 years, I have learned a lot about this profession. I learned that rigid thinking, convention, and preconceived ideas do not ensure success. In the words of Paul Tudor Jones, “You adapt, evolve, compete, or (you) die.” We must adapt to the rapidly changing world which we serve. The R3 approach and Relevancy Roadmap provide effective methods to adapt to meet the challenges before us. You will hear more about the importance of relevancy from our two distinguished speakers this morning – Richard Louv and Lynn Scarlett. Please listen closely to what they have to say.