Movement Patterns of Brown Pelicans in the South Atlantic Bight

Movement Patterns of Brown Pelicans in the South Atlantic Bight

The South Carolina Cooperative Fish and Wildlife Research Unit is leading research on the movement patterns and at-sea habitat use of brown pelicans in the South Atlantic Bight (coastlines of South Carolina, Georgia, and north Florida, hereafter SAB). Nearshore seabirds such as brown pelicans can serve as valuable indicator species for ecosystem health in marine, coastal, and estuarine systems because they are transboundary in nature and integrate information across a range of trophic systems. In the eastern U.S., pelicans breed from Texas through Florida on the Gulf coast, and from south Florida to the Chesapeake Bay on the Atlantic coast. They are a species of conservation concern in many states and their breeding colonies receive protection throughout their range. 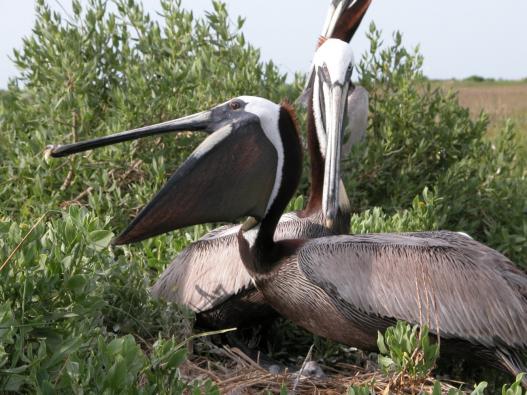 Despite their wide range and iconic status, the species has received little research attention since its removal from the U.S. Endangered Species List in 2009. In fact, prior to the Deep Water Horizon (DWH) oil spill, detailed data on foraging ecology, reproductive success, movement patterns, or health of brown pelicans were limited in both the Gulf and Atlantic regions. The sparse availability of such data for pelicans (as well as other nearshore seabirds in the region such as royal tern, sandwich tern, and black skimmer) has resulted in a relatively incomplete picture of pelican ecology in the Gulf, specifically the Bureau of Ocean Energy Management (BOEM) South Atlantic Planning Area (SAP) in a pre-spill environment.

The South Carolina Unit has undertaken extensive research on brown pelicans. Following up a successful effort to investigate movement ecology, foraging ecology, and habitat use in the Gulf, a new effort was initiated in 2017 to conduct similar research along the coastlines of the SAB. There are an estimated 6,000 – 8,000 pairs of brown pelicans nesting in the SAB, and greater than 50 percent of these nests occur in South Carolina. Colonies are distributed regularly throughout the coastal area of the SAB. The species also occurs here during migration and wintering periods. The understanding of fine-scale habitat use is, however, very limited and therefore researchers cannot readily determine the probability of actual exposure to any factors at sea until they assess foraging ranges, movement patterns, and migration paths at the resolution available via global positioning system (GPS) tracking.

By tagging birds at breeding colonies, the spatial connection between at-sea locations and colonies can be assessed, and hence evaluate risks to each colony. Satellite transmitters will yield data on home range and foraging areas during both the breeding and nonbreeding season, colony attendance, dispersal, migration, and habitat use at-sea, on loafing areas, and on wintering grounds. The above data will be used to determine high, moderate, and low use areas at sea throughout the year. Movement and use data will be layered with available marine habitat data, wind and current data, and environmental data to provide individual- and colony-based risk assessments for brown pelicans.

To date, the South Carolina Unit has deployed 45 transmitters on breeding pelicans at four colonies in South Carolina: Marsh Island, Charleston Harbor, Bird Key, and Deveaux Bank. Preliminary data suggest that during the breeding season, birds typically remain within 10-50 km of their breeding colony although longer foraging trips beyond 100 km have been observed as well. Post-breeding results in a varied migration pattern with birds being distributed quite widely. This ‘partial migration’ strategy has been observed in the Gulf as well. During the South Carolina Unit study, the researchers tracked migrating pelicans following the 2017 and 2018 breeding seasons north into North Carolina and as far as the Chesapeake Bay, south to Georgia and Florida, and even into Cuba and the Yucatan Peninsula in Mexico.

Tracking data are also being used to assess how pelicans respond to natural events. During 2017 and 2018 the study area was impacted by three hurricanes. The tracking data allows researchers to assess how birds respond to these natural yet extreme events. The South Carolina Unit is preparing a scientific paper that will explore how movement behavior and habitat use change immediately prior to a hurricane. In the next 1-2 years, the researchers also plan to explore how the movement and habitat use of pelicans affects their interactions with commercial fishing activity, and how their choice of foraging ranges might impact exposure to contaminants from human sources. The South Carolina Unit will also deploy tags at colonies within the Georgia Bight and the Cape Canaveral area to expand the scope of the study into the southern reaches of the South Atlantic Bight.

This research will provide baseline ecological information for brown pelicans and can be used to estimate impacts of human activities and possibly to identify potential mitigation techniques in the region should pelicans be damaged by infrastructure development or a spill. Similar data are being collected on pelagic and nearshore seabirds in other regions along the Atlantic to address similar issues (e.g. mid- and north Atlantic studies of loons, seaducks, and gannets) but to date have not been initiated in the SAP.

Data collected also will provide a baseline for assessment of future spill effects and may be used to assist in development of potential future mitigation measures. Because of the high-profile nature of the work proposed herein, coordination among state and federal agencies and nonprofits is a priority.

The ONB features articles from Cooperative Fish and Wildlife Research Units across the country. The Units are leading exciting, new fish and wildlife research projects that we believe our readers will appreciate reading about. Patrick Jodice is the Unit Leader at the South Carolina Cooperative Fish and Wildlife Research Unit, pjodice@clemson.edu, 864-656-6190.