The Idaho Department of Fish and Game (IDF&G); Montana Fish, Wildlife, and Parks (MFWP); and the University of Montana (UM) are teaming up to test using camera traps to monitor white-tailed deer, mule deer, elk, and moose populations in Idaho and northwest Montana. This cooperative study builds on the work of UM graduate student Anna Moeller and Professor Paul Lukacs who developed three new, unbiased methods to estimate abundance using photos from trail cameras. In addition to abundance, the joint project will evaluate the use of remote camera data to monitor population composition and survival. IDF&G and MFWP are exploring this approach in response to the high cost, logistic challenges, and risk associated with aerial surveys, as well as the need to monitor populations in forested habitats where animals cannot be counted effectively from the air. This project is funded with state license revenue, Federal Aid in Wildlife Restoration funding, and contributions from the Rocky Mountain Elk Foundation and the Mule Deer Foundation. 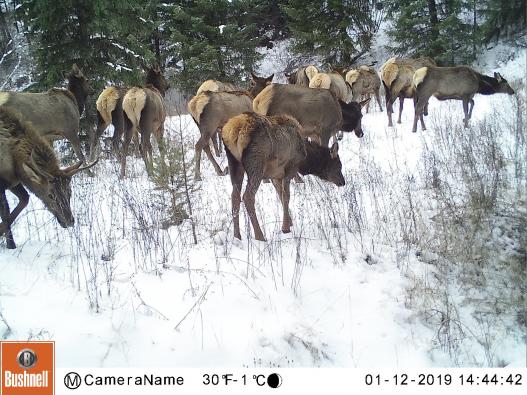 Estimates of abundance, population composition (age- and sex-ratios), and survival are important for management of ungulate populations. Aerial surveys have been commonly used to gather data to make these estimates, but the increasing cost and difficulty of finding qualified pilots, not to mention the risks associated with flying, create challenges for wildlife biologists. In addition, in heavily forested habitats, like those found in the Idaho Panhandle and northwest Montana, utility of aerial surveys is limited by low sightability.

Biologists began using camera “traps” several years ago to capture photos over long periods of time in remote locations to monitor rare and cryptic species like tigers and wolverine. This approach has been shown to be an effective way to monitor the distribution of such species and can be used to estimate abundance, if the animals have markings that allow individual identification. Until recently, it was not clear whether camera traps could be used to monitor abundant species like deer and elk that cannot be individually identified in photos.

Bio-statisticians developed several initial methods using camera trap data to estimate abundance for species like deer and elk, but each relied on untested assumptions or required data about animal movement rates or home range sizes that were difficult and costly to collect. UM graduate student Anna Moeller and her advisor, Dr. Paul Lukacs, identified three novel ways to analyze camera trap data that do not have those limitations. The Instantaneous Sampling (IS) method and the Space-to-Event (STE) and Time-to-Event (TTE) modelling approaches developed by Moeller and Lukacs analyze photos in ways that are independent of population closure, home range size, and animal movement rates. These approaches were tested using both simulated data and camera trap data gathered for elk in two study areas in Idaho in 2016. The resulting estimates were found to be unbiased, with reasonable confidence intervals.

Based on Moeller and Lukacs’ work, IDF&G and MFWP are initiating a research project across multiple study sites in Idaho and northwest Montana. The goals of the project include testing application of the IS, STE, and TTE approaches at a practical, management scale as well as expanding the information derived from camera trap photos to include estimates of population sex and age composition and fawn survival from birth through mid-winter. If these approaches to monitoring deer, elk, and moose populations prove to be efficient and effective on a scale that managers can apply across larger areas, they will improve biologists’ ability to set population objectives, harvest quotas, and take other actions to provide public benefits from these resources.