Wildlife agencies are increasing efforts to control the movement of invasive Asian carp in waterways that don’t currently have established populations. Where they are established, the non-native fish have significantly impacted watersheds and native fisheries and agencies are concerned about the fish expanding into new areas that currently do not have them. The efforts include the use of environmental DNA to identify areas where the fish may be moving as well as deploying new technologies to limit the movement. 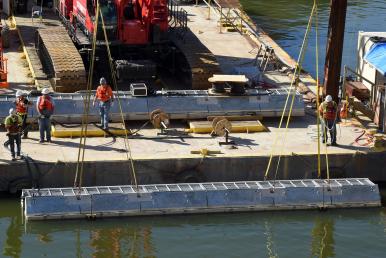 Asian carp are a broad variety of fish species from Asia. Two species in particular–the bighead and silver carp–were imported to the U.S. from China in the 1970s to clean and filter retention ponds. When the ponds flooded, Asian carp escaped into the Mississippi River and have made their way from that river system to the Illinois water system where they are now approaching Lake Michigan. Asian carp currently threaten native aquatic ecosystems throughout the United States, including the Great Lakes and Mississippi River basins, and major tributaries such as the Ohio and Illinois rivers. Many fishermen are worried that the fish will move into Lake Michigan which would have severe impacts on recreational fisheries and local economies. The fish are plankton eaters impacting food sources for native fish and also eat larval fish which can reduce recruitment of native fish in the ecosystem.

The Illinois Department of Natural Resources announced that it was expanding waterway testing following a spike in invasive Asian carp DNA detections in the Chicago River about five miles from Lake Michigan. On Friday, November 1, state and federal officials announced plans for a two-week intensive sampling effort in the Chicago River’s south branch after routine fall testing yielded 76 hits of environmental DNA, or eDNA, for silver and bighead carp. No live fish were found and no other waterways tested positive for carp DNA in the area downstream from where electronic barriers are supposed to be blocking the fish from reaching Lake Michigan.

Illinois DNR is sharing a Business Process Analysis and Action Plan as a guide to bolster current removal activities and further reduce the spread of Asian carp in the Illinois Waterway, as well as protect native Illinois species. Illinois DNR has used contracted commercial fishers to reduce populations in the upper Illinois Waterway significantly, with more than 6.3 million pounds of Asian carp removed to date. The Illinois Action Plan explores the necessary steps to create an Asian Carp fishery market that would remove significant numbers of fish to reduce or eliminate the spread and abundance of Asian carp.

The Action Plan is premised on the idea that private sector and market forces can be expanded with desirable products for domestic and international markets. Such market forces will help drive Asian Carp removal efforts. Employing the private sector may require far fewer governmental dollars in the long run than many other alternatives and will leverage the ongoing success of current business activity. Overall, Illinois has identified a goal of removing of 20-50 million pounds of Asian carp from the lower Illinois River to achieve maximum effect on established populations at strategic locations.

The Illinois Action Plan makes eight recommendations to support local and regional economies that will provide needed tax revenue to local, state, and federal governments, as well as increase overall employment in surrounding areas. The Action Plan has recommended a $32 million investment over seven years to build the fishery market and add value through very specific actions.

In related news, the Kentucky Department of Fish and Wildlife Resources officially commissioned a new bioacoustic fish fence that is intended to stop the spread of Asian carp into Lake Barkley. The $7 million, three-year field trial will help wildlife officials determine whether the device effectively keeps Asian carp from entering the lock and moving upstream.

The fence works as a deterrent by broadcasting noise at a frequency that irritates the carp. The noise is contained within a wall of bubbles that are lit by strobes. The combination has worked well in the laboratory and in smaller-scale outdoor settings.

For the first large-scale test, wildlife officials chose Barkley, which straddles the Kentucky-Tennessee border, in part because Asian carp are already established there, making it easy to track their movements. Also, the Kentucky Department of Fish and Wildlife Resources already had a full-time crew there monitoring the Asian carp population. The Kentucky Aquatic Nuisance Species program has been tagging both Asian carp and native fish species ahead of the installation of the fence to be able to monitor their movements and interaction with the fence.