One species of bats severely affected by white-nose syndrome (WNS) is the northern long-eared bat, Myotis septentrionalis. Population declines of up to 99 percent have been documented throughout its range and the species undergoes near extirpation within three years in the locations where the fungus that causes WNS, Pseudogymnoascus destructans, is detected. Due to the effects of the disease on populations and an apparent lack of resistance or tolerance to WNS, northern long-eared bats were listed as threatened under the federal Endangered Species Act in 2015. However, certain populations in coastal areas of New England appear to be persisting even after infection by the fungus. 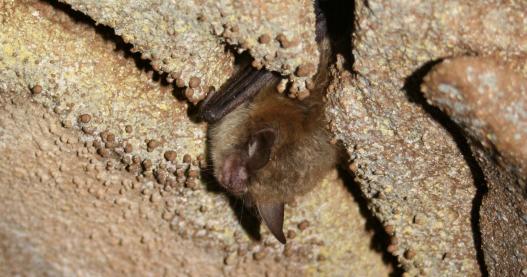 With support from the USFWS Small Grants Program, researchers in the Turner lab at the University of Albany, State University of New York studied populations of northern long-eared bats off the coast of the northeastern U.S. that appear to be persisting despite infection with P. destructans. Due to observations of successful reproduction, high levels of acoustic activity and net captures, and local hibernation of northern long-eared bats off the coast of New England, the researchers designed a study of these coastal populations of bats. They hypothesized that the bats use of anthropogenic sites with lower bat densities and moderate coastal climates allowed for a reduction in exposure and spread of WNS along with a shortened hibernation season, reducing the time when bats are most vulnerable to infection.

The study took place on the northeastern islands of Long Island, New York and Martha’s Vineyard and Nantucket, Massachusetts during the fall of 2018 to spring of 2019. Winters in this region tend to be significantly milder than further inland. During the study, northern long-eared bats were captured by mist nets and tracked using telemetry receivers. Discovered hibernacula were fitted with acoustic detectors to monitor activity and emergence. At the end of the hibernation period, bats were captured, and swab samples were taken to test for presence and quantity of P. destructans.

The researchers will continue this study of northern long-eared bats on coastal islands, but so far they have found that the bats in these islands are active during the winter, have a shorter hibernation period than on the mainland, and have a wide variation in the characteristics of hibernacula used as well as the prevalence of P. destructans among the islands. This study provides important information needed for protecting the remnant populations of these bats, especially regarding the fall and winter behaviors and selections of roosting and hibernacula that can be protected. The Turner lab will be developing best management plans to reduce the bat/human conflicts on the islands and providing landowners with information on the bats and how to protect these populations.