The Southeastern Association of Fish and Wildlife Agencies (SEAFWA) recently adopted a black bear resistant container testing protocol. The protocol provides consistent guidelines for evaluating food and garbage containers, wildlife feeders, or other items that may hold substances that are attractive to bears. Rapid growth of human and bear populations across the southeastern U.S. has led to increasing conflicts that result from bears accessing anthropogenic food rewards. SEAFWA recognized the need to increase human safety and enhance bear conservation by developing a program that objectively assesses devices designed to secure bear attractants. SEAFWA also wants to be sure that feeders used to deliver toxicants to help reduce feral pig populations do not have an adverse impact on black bears. The Wildlife Management Institute (WMI) will partner with SEAFWA to implement the protocol, building on WMI’s experience implementing the grizzly bear resistant testing protocol for the Interagency Grizzly Bear Committee (IGBC). Products that are certified “Black Bear Resistant” through the protocol will be listed on SEAFWA’s BearWise website. Where appropriate, local, state, or federal governments, homeowners’ associations, and others can require or encourage voluntary use of these containers. 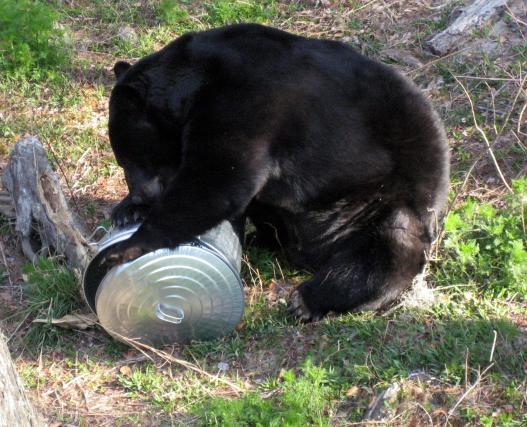 In the southeastern U.S., the human population has increased by 28 million since 1980 and black bear numbers have more than doubled. As a result, people and bears are interacting more frequently, often in ways that threaten public safety or bear conservation. “Food conditioning” as a result of bears gaining access to anthropogenic food, garbage, or other attractants is a major factor contributing to human-bear conflicts. Conservation agencies have long recognized the importance of securing bear attractants to prevent food conditioning. In the northwestern states, the Interagency Grizzly Bear Committee and its member agencies have adopted food storage requirements for all federal and some state lands within grizzly bear range to reduce bears’ access to attractants. One challenge associated with minimizing food conditioning is identifying which containers are reasonably bear resistant.

The IGBC developed standards and a testing protocol in the 1980s to determine what containers were sufficiently grizzly bear resistant to be certified for use storing attractants – from food, to garbage, to animal feed. Over the past three decades, hundreds of coolers, paniers, storage bags, and garbage cans have been run through the protocol, which includes testing with live grizzly bears at the Grizzly Wolf Discovery Center in Montana. WMI has administered the testing protocol for IGBC for the past eight years. Use of IGBC Certified Grizzly Bear Resistant containers has helped minimize human-grizzly bear conflicts. IGBC Certification is a valuable marketing element for numerous manufacturers.

SEAFWA member states began talking about developing a similar testing protocol for black bear resistant containers a few years ago. The need for such a protocol was based, in part, on questions about whether testing products with grizzly bears was appropriate for the Southeast. Grizzly bears are generally larger and stronger than black bears, so some products that failed the IGBC protocol might resist access by black bears. On the other hand, the greater curvature of black bears’ claws might enable them to open some containers grizzly bears cannot.

In addition, SEAFWA states face a challenge that their northwestern counterparts do not – at least not yet. Feral pigs are an invasive species across the Southeast and efforts are underway to develop a toxicant that can be used to control pig populations. Sodium nitrite-laced baits appear to offer the greatest promise for reducing pig numbers. However, unless feeders used to deliver the pig toxicants are bear resistant, the potential for non-target mortality is high. This is of particular concern in Louisiana where feral pigs are abundant and black bears were just recently removed from the list of threatened and endangered species.

SEAFWA’s Large Carnivore Working Group spent the last two years consulting with black bear experts and with WMI about the IGBC testing protocol. The group developed a testing protocol modeled on the IGBC’s, but with the added element of testing feeders that could be used to disburse pig toxicants. The goals of the protocol are to:

The protocol includes an initial evaluation of all products, based on a review of mechanical drawings, materials list, and photos of latches, hinges, lids, doors, openings, measurements of all gaps, blueprints, and any other material necessary to determine if the product can be safely tested using live bears. Phase 2 of the protocol will include testing by captive black bears following strict guidelines for the type of attractants placed in the container, testing environment, and duration of exposure to the bears. An additional third phase of the protocol, involving field tests in habitat occupied by wild black bears using non-toxic bait, will be applied to test feral pig toxicant delivery systems.

SEAFWA and WMI are developing the details of a partnership to build on WMI’s experience implementing the IGBC Grizzly Bear testing protocol. SEAFWA will fund the process of “standing up” the testing protocol, including identifying appropriate testing facilities and administrative procedures. Once established, both SEAFWA and WMI expect manufacturers whose products are tested to cover the cost of certification.