The USGS Alabama Cooperative Fish and Wildlife Research Unit and the USGS Leetown Science Center are partnering with the U.S. Fish and Wildlife Service (USFWS) to re-envision the way science supports endangered species decision making. The partners are working together to develop a Species Status Assessment (SSA) framework for Sonoran desert tortoise, the eastern black rail, the Puerto Rican boa, the Rio Grande cutthroat trout, and other species. The USFWS is required under the U.S. Endangered Species Act (ESA) to consider the health of species at risk of extinction. 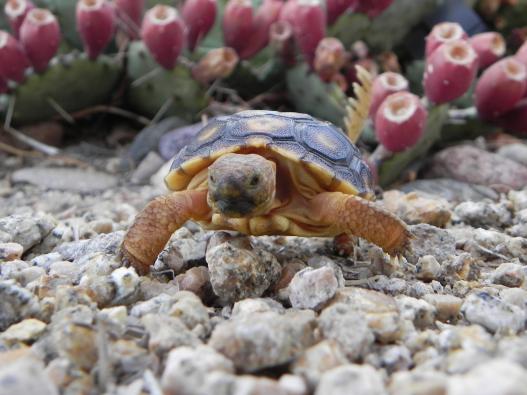 A baby Sonoran Desert Tortoise making its way through a Prickly Pear Cactus.

A series of critiques on the role of science in ESA decisions have called for improved consistency and transparency in species risk assessments and clear distinctions between science input and policy application. With these critiques in mind, the Alabama Unit and Leetown Science Center examined the existing/historic role of science in ESA decision making, but also took a step back to ask and try to answer what the ideal role for science would be.

The researchers focused first on understanding what information is needed to make decisions about listing or delisting (i.e., classifications) or recovery planning decisions for any given species, then focused on designing a framework that would best provide and organize that information. The framework has three primary components:

The analyses of current and future status evaluate the species through the lenses of “representation,” “redundancy,” and “resiliency” of the populations – the “three Rs”. These are widely used and well-developed concepts in conservation biology, but the new SSA framework specifically defines each concept.

Components of the “three Rs”:

In the SSA’s reports, practitioners use measurable quantities related to the three Rs, such as abundance, distribution, population growth rate, heterozygosity, inbreeding depression, and changes in these quantities over time to make inference about the representation, redundancy, and resiliency for decision makers.

One unifying commonality are the three core components and that all SSAs are focused on population viability analysis for the species. Population viability is an aging but well-developed scientific concept in population conservation that focuses on predicting the future of a population. PVAs incorporate relevant uncertainties and characterize the range of future possible states of the species given what we know and don’t know about its future. These predictive tools can incorporate current uncertainties from temporal variability in environments or unknown parameters, but also incorporate future unknowns about the ecological systems through simulating scenarios about possible or likely future environmental conditions.

It is impossible to escape unknowns and uncertainties, however SSAs work to reduce uncertainties where possible and communicate the potential effects of the uncertainties on decision making. The generalized framework guides the SSA authors toward developing a document that provides the information necessary to make transparent and logical decisions.

In the end, the SSA itself is not a decision document but rather is a scientific report that records and organizes the best available information on a species. The writing and analysis therein are intended to support a decision and attempt to anticipate the decision makers’ information needs.