Researchers at the Idaho Cooperative Fish and Wildlife Research Unit, the University of Idaho, and the USGS Northwest Climate Adaptation Science Center are investigating how warmer winters in the interior Pacific Northwest are affecting wildlife populations. 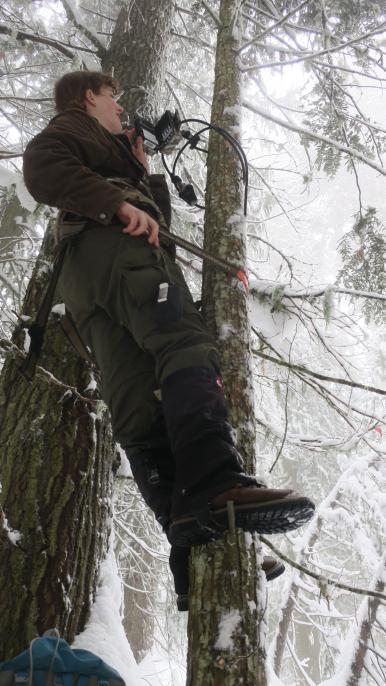 University of Idaho graduate student Kaitlyn Strickfaden checks a camera trap in one of her field sites in Moscow Mountain, Idaho.

A doe appears at the edge of a grainy black-and-white photograph. Over a series of images, she wanders across the frame, munching on late-season grass before disappearing. Later that night, a blizzard hits, leaving the previously bare ground covered in a thick blanket of fresh powder. The doe returns, narrow hooves sinking deep as she wades through the snow. She does not stop this time, passing through quickly in search of an easier meal. University of Idaho graduate student Kaitlyn Strickfaden notes the camera trap’s location on Moscow Mountain and marks the images for further processing.

Snow is a defining feature of Idaho winters for deer, elk, and other wildlife. It can be critical for survival, insulating burrows and providing white camouflage, or a slippery hazard, covering food and leaving animals vulnerable to sure-footed wolves and mountain lions. Yet many parts of the region have seen less snowfall in recent years, raising questions of whether wildlife populations will survive, or thrive, in future winters.

Researchers at the University of Idaho and the affiliated Idaho Cooperative Fish and Wildlife Research Unit are studying how snow affects wildlife in the Rocky Mountains. The researchers, including Strickfaden and lead scientists Timothy Link and David Ausband, are developing better tools for measuring snow accumulation and using models to predict future wildlife survival and distributions. This work was funded in part by the USGS Northwest Climate Adaptation Science Center and is done in conjunction with partners at the Idaho Department of Fish and Game, U.S. Fish and Wildlife Service, the Coeur d’Alene Tribe, and public and private landowners in the region.

“There’s all these holes in snow data,” says Strickfaden. “[Current methods use] satellites to try to collect this information, but that’s really broad scale and you’re not getting any indication of what’s going on under the canopy. This makes it difficult to manage wildlife.”

Part of the problem is that measuring snow is surprisingly difficult. Shifting patterns of trees, sunlight, and wind make snow cover sporadic even on the smallest scales, where multi-foot drifts could sit next to bare ground. Even getting into the field to collect data can be treacherous, particularly in the isolated mountains where wildlife thrive. Although Moscow Mountain is only 20 minutes from campus, Strickfaden must snowshoe to her field sites during the winter and plan fieldwork around road closures and storms.

To solve these problems, Strickfaden developed a system for remotely measuring snow depth using a joint resource within the hunting and science communities: camera traps. In much the same way hunters use motion-sensor cameras to look for deer, scientists place cameras in remote locations to collect data on wildlife populations and ecosystems. Strickfaden developed a software that can impose a virtual “stake” onto camera trap images, allowing her to measure how deep the snow is in each image.

"[We’re] taking advantage of a data source that’s already out there to fill in this really important knowledge gap,” she says.

Strickfaden’s camera trap images also provide insights into the winter behaviors of big game. By relating the deer and elk activity observed in camera traps to the snow characteristics in the images, she is hoping to develop a new Winter Severity Index to describe the animals’ seasonal survival. Current tools, which focus on snow depth and temperature, suggest deer and elk populations should have better winter survival in coming years, reflecting more food availability and better mobility in less snowy winters. Yet these models don’t consider potential climate change effects that could negatively impact the animals.

“With climate change, there are a lot more freeze-thaw cycles and rain-on-snow events that create really hard frozen layers that wildlife aren’t able to dig through to get at food and that make it more difficult to actually walk through the snow,” Strickfaden says.

By broadening the snow characteristics being considered, Strickfaden’s new index will hopefully give state and local wildlife managers more accurate estimates of how deer and elk will survive a given winter, in turn informing the number of hunting tags they should give out to maintain healthy populations.

Additionally, Strickfaden and her team are working to create models to aid conservation of animals that need snow to survive. The team is developing a spatial model to look for areas that will accumulate and retain snow longer into the season, called snow refugia. Like that one pile of blackened snow still on the driveway mid-spring, some landscapes shelter long-lasting pockets of ice and snow. By understanding where these snow refugia are located, managers and conservation practitioners can predict where snow-dependent species may thrive even under climate change. These areas also provide ideal habitats for coldwater fish, such as native trout, that rely on snowmelt-cooled streams.

Strickfaden hopes the tools her team has developed will be broadly useful to wildlife biologists, resource managers, and hunting communities across the country, particularly in locations experiencing dramatic shifts in winter temperatures and snowfall. Her partners in Idaho have already expressed interest in applying the models to upcoming initiatives.

“I feel really lucky that these organizations are interested in the research we’re doing,” Strickfaden says. “Knowing that that they’re trying to use [my] models and tools for targeting management and that I’ve been able to collaborate with them, that’s definitely a huge plus.”

The ONB features articles from U.S. Geological Survey Cooperative Fish and Wildlife Research Units across the country. The Units are leading exciting, new fish and wildlife research projects that we believe our readers will appreciate reading about. This story was written by Jordan Bush, Science Communications Specialist, USGS National Climate Adaptation Science Center.