The Western Association of Fish and Wildlife Agencies (WAFWA) recently updated the business plan for its Lesser Prairie Chicken (LPC) Candidate Conservation Agreement with Assurances (CCAA). The CCAA was developed by WAFWA as part of a Range-wide Conservation Plan approved in 2013 by the five states that share LPC range (CO, NM, OK, KS, and TX). The CCAA provides incentives to avoid, minimize and mitigate impacts of development to LPC habitat in exchange for certainty that no further action will be required if the LPC is listed as threatened or endangered under the Endangered Species Act. An independent programmatic review of WAFWA’s LPC program in 2019 found the CCAA was highly successful in terms of habitat conservation during its first five years with over 99,000 acres of habitat conserved or enhanced in contrast to less than 8,000 acres impacted. The review also identified a number of issues related to program reporting, financing, and administration that warranted attention. In response, WAFWA added clarity to the management of the CCAA program to assure long-term financial sustainability, adopted revised reporting and accounting practices to increase transparency to participating agencies and stakeholders, and updated its business plan for the CCAA. The updated business plan establishes governance structure and roles for the CCAA’s stakeholders and outlines the specific criteria that will be used to ensure additional habitat conservation. WAFWA recently hosted a webinar that provides a comprehensive overview of the program’s history, updated business plan, and ongoing efforts to enhance LPC conservation. 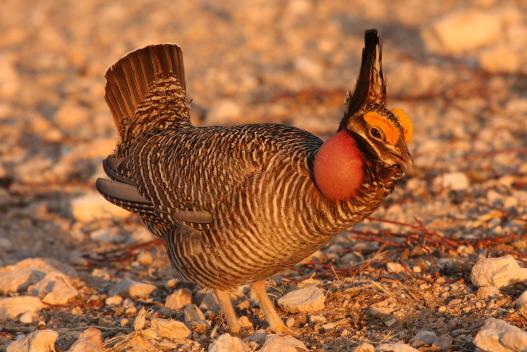 The first petition to list the LPC as threatened or endangered was filed in 1998. Although the FWS determined that LPCs may be warranted for listing due to historic habitat degradation and the potential for further impacts of oil and gas development, listing was precluded due to higher demands for FWS action. In a 2010 settlement agreement, the FWS committed to making a final listing decision on the LPC petition by 2013. In response, the five states that share LPC range undertook a collaborative effort to develop a comprehensive, range-wide conservation plan. The planning process was intended to preclude the need to list the species, or at a minimum, to inform the listing decision. Importantly, the states engaged two key stakeholders—oil and gas industry representatives and private landowners—as well as conservation organizations in plan development.

The range-wide conservation plan, completed in 2013, established population and habitat goals, defined clear habitat quality criteria, incorporated WAFWA’s Crucial Habitat Assessment Tool for decision-support, expanded voluntary conservation efforts, and created a habitat mitigation framework that provided the basis for the CCAA. The CCAA was designed to give the oil and gas industry an incentive to avoid, minimize, or mitigate the impacts of energy development. The CCAA created a mechanism for developers to enter into an agreement that requires them to take certain actions, such as avoiding critical habitat areas, consolidating drilling sites, and providing funding to place conservation easements on other properties or enhance habitat off-site in exchange for a commitment from the FWS that, in the event the LPC is eventually listed, the oil and gas partners who are participating in the program and in good standing will not be required to take further actions.

When the FWS endorsed the plan and approved the CCAA in late 2013, WAFWA began enrolling oil and gas companies in the program. In anticipation of significant demand and revenue from industry, WAFWA hired nearly a dozen additional people to implement and administer the program.

The following seven years were marked by a series of back and forth actions related to the ESA. In 2014, the FWS listed the LPC as threatened throughout its range. In 2015, a federal court overturned the listing. In 2016, a second listing petition was submitted, and once again, the FWS found the species may warrant listing. In early 2021, the FWS proposed to list the northern distinct population segment (DPS) of LPC as threatened and the southern DPS as endangered. A final decision is expected in May, 2022.

Throughout these turbulent years, WAFWA staff worked diligently with their partners to conserve and restore LPC habitat using the CCAA. A total of 111 companies enrolled more than 6.2 million acres in the CCAA and the range-wide plan and provided over $65 million to be used for habitat conservation and mitigation. Between 2014 and 2021, over 99,000 acres of LPC habitat were conserved and close to 18,000 acres restored while less than 8,000 acres of habitat saw impacts from oil and gas development. Importantly, under the CCAA, 89% of energy projects were co-located to minimize industry’s footprint, with most impacts in low quality habitat and most conservation off-sets in high-quality habitat.

While LPC conservation efforts have been effective on the ground, an independent programmatic review commissioned by WAFWA in 2019 identified a number of issues that warranted attention. These included concerns about the financial stability of the program given actual—as opposed to anticipated—revenue and WAFWA staffing levels, as well as accounting and reporting practices that were less transparent than desired. In response to this review, WAFWA took steps to right-size its staff to fit financial resources, streamline accounting practices, change reporting format for the CCAA to increase clarity, and establish a process for an annual program review and reporting. In addition, WAFWA developed an updated business plan for the CCAA. The business plan lays out clear standard operating procedures for all aspects of the program, establishes a roadmap to track task accomplishments, and implements a new online portal to increase transparency of the program. The business plan employs a user-friendly, question and answer format to make it easy for readers to find information they are most interested in.

Zach Lowe, WAFWA Executive Director, said, “WAFWA’s updated business plan will help continue to add strength, stability, and transparency to our Lesser Prairie Chicken efforts in a way that allows for meaningful habitat conservation and responsible operations of the energy industry to meet America’s needs regardless of the uncertainty of future listing decisions.”

Readers interested in more information about WAFWA’s LPC conservation efforts and the CCAA can find additional information on the WAFWA website. In addition, WAFWA posted a 2-hour webinar recorded in September that covers these issues in depth.