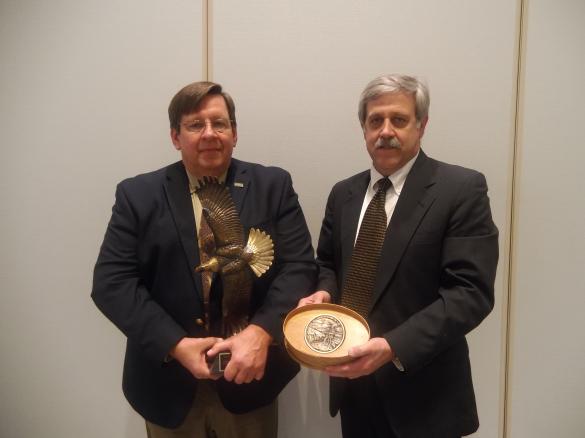 The award, established to honor a person who has dedicated their career to professional science, management, and conservation of natural resources, is WMI’s highest individual honor and one of the most prestigious in the natural resource management profession. Like the award’s namesake, Fisher has achieved uncommon success in the field of conservation and has done so without fanfare or any expectation of personal recognition.

A pathologist by training, Fischer earned his PhD from the University of Missouri-Columbia in 1992. Prior to that, he received a bachelor’s degree in wildlife biology from the University of Missouri in 1979 and worked as a biologist with the Missouri Department of Conservation before obtaining his Doctor of Veterinary Medicine degree in 1986 and working in private practice.

He is considered an expert on numerous wildlife diseases including avian vacuolar myelinopathy, E. coli, mycoplasmal conjunctivitis, and hemorrhagic disease. However, it is his leadership in defending free-ranging wildlife from the impacts of introduced diseases and those who wish to marginalize them that earned Fischer a measure of respect and influence rarely encountered in the field of wildlife management.

“His accomplishments, both academically and professionally, are staggering and far too numerous to list in an award presentation,” noted WMI president Steve Williams who presented the award to Fischer. “John is one of the rare academicians whose intellectual prowess and accomplishments are second only to his dedication to the application of science-based wildlife management policies and practices.”

Fischer has served on dozens of regional, state, and national wildlife health committees, and is a member of the U.S. Secretary of Agriculture’s Advisory Committee on Animal Health and the World Organization for Animal Health’s Wildlife Working Group. He has chaired the United States Animal Health Association Committee on Wildlife Diseases as well as the Association of Fish and Wildlife Agencies Fish and Wildlife Health Committee as one of the few non-director chairs; a testament to the trust he has earned from all 50 state fish and wildlife agencies.

“John is, without question, the leading advocate for the protection of wildlife from the threat of disease and has a track record of influencing national and international audiences and legislators,” said Williams.

Even with all his other accomplishments, Fischer is best known for his Directorship of the Southeastern Cooperative Wildlife Disease Study at the University of Georgia, which, under his leadership, has grown to be recognized as a world-class diagnostic wildlife health service organization to 18 states in the U.S. and is an internationally-known center of infectious disease research.

“Like George Bird Grinnell,” observed Williams, “John has provided a service to the profession that has and will continue to impact the structures of wildlife management and policy far beyond his professional tenure.”