Welcome to the 83rd North American Wildlife and Natural Resources Conference. Thank you all for participating and special thanks to all the state agency, federal agency, non-governmental organizations, businesses, industries, and exhibitors for your financial support to help make this conference successful. I also want to thank all the special session chairs, workshop chairs, and the speakers, for addressing the conservation challenges facing our nation. Finally, thank you Bob Duncan for your welcome to the Commonwealth of Virginia. 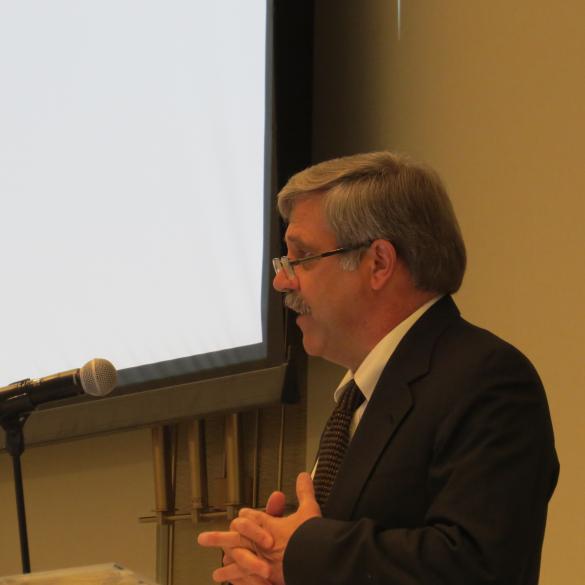 WMI has had another busy year. We continued our young forest initiative aimed at forest habitat restoration to benefit more than 60 wildlife species across the northeast. We have assisted numerous state agencies by providing administrative services to employ on the ground biologists over and above agency designated full-time equivalents. WMI completed an assessment of big game migratory corridors in the western U.S. In conjunction with the Kentucky Army National Guard, we updated the Integrated Natural Resource Management Plans for three installations. We conducted two regional training workshops on the public trust responsibilities of state agencies. WMI conducted numerous workshops and assisted in the development of state agency hunter recruitment, retention, and reactivation (R3) programs. We hosted the Fish and Wildlife Business Summit to enhance the cooperative relationships among states, the Fish and Wildlife Service, and industry partners.

When we last met in Spokane, I talked about the transition that was occurring in Washington, DC. At that point, it was too early to predict how that change would affect fish and wildlife conservation. The picture today is only a bit more focused. At the federal level, the Departments of Interior and Agriculture have embarked on reorganization efforts. But most concerning is the policy decisions reflected in the most recent Administration’s budget request. In that request, funding for six collaborative partnership programs was eliminated. The reduction in requested funding for Ecological Services’ listing and restoration programs, Partners for Fish and Wildlife, and State and Tribal Wildlife Grants was significant. Congressional action at the end of last week rejected that budget request and actually provided additional funding for many of these critical, collaborative conservation efforts. Congress also charted a course to fix the unsustainable wildfire funding mess that has plagued federal land management agencies. As you are aware, the President signed that bill into law on Friday.

At least at the federal level, it appears that we dodged a bullet. However, the challenges we face as a profession continue to be complex and numerous. Let’s not forget that our community has faced adversity for decades and we still have made incredible progress. As Theodore Roosevelt said, “Believe you can and you’re halfway there.”

In the 1980’s waterfowl managers believed they needed a better way to manage waterfowl and the North American Waterfowl Management Plan was initiated. In the late 1990’s bird conservationists believed that a partnership approach to continental bird conservation was necessary and the North American Bird Conservation Initiative was born. In the early 2000’s fishery managers believed that we needed a nationwide approach to restore fish habitat and the National Fish Habitat Partnership was established. Those successes started with a belief that we could face challenges and achieve success.

Today, sustainable funding for the conservation of fish and wildlife resources remains our greatest challenge. Americans invest in what is important to them. Efforts to make conservation more relevant and to modernize agency programs have sprouted. Because the Association of Fish and Wildlife Agencies believed that a diverse group of interested individuals could chart a new course for sustainable funding, AFWA constituted the Blue Ribbon Panel. Now the Alliance for America’s Fish and Wildlife campaign carries on that progress by signing on a broad coalition of organizations and numerous congressional co-sponsors to the Recovering America’s Wildlife Act.

An aging workforce and retirements across federal and state agencies caused concern about a leadership vacuum in our profession. A group of Boone and Crockett Club members believed that a world-class training program would address that challenge. Now the National Conservation Leadership Institute is in its 12th year with about 420 graduates serving at federal and state agencies, conservation organizations, tribes, and related industries. Trained in adaptive leadership principles, we have a strong cadre of future conservation leaders.

Faced with declining hunter participation rates and loss of financial support for state agency conservation programs, some of us believed that a new approach to recruiting hunters had to be found. From that belief, the Council to Advance Hunting and Shooting Sports was formed. The Council, WMI, and agency colleagues developed the National Hunting and Shooting Sports Action Plan. This plan has spawned a new and focused effort to recruit, retain, and reactivate hunters and anglers in almost every state. The R3 community has grown nationwide and will hold the first National R3 Symposium in May this year.

As Roosevelt stated, ““Believe you can and you’re halfway there.” Individuals and groups believe there are better ways to be successful than what has been done in the past. Whether it was funding, leadership, recruitment, or a new approach to conservation, as a profession, we have faced these challenges head on. In spite of strong headwinds, I believe we have made progress; we will persevere, and be as successful going forward as our profession has in the past. We might be even more than “halfway there.”

In closing, WMI and others have addressed the issue of relevancy at each of the North American Conferences for the last seven years. Today we will hear from two individuals who believed that change was necessary to make their organizations more relevant to the public. They have put that belief into practice. First, Keith Creagh will discuss his efforts at the Michigan Department of Natural Resources. Second, Steve Smits will tell us how he changed the iconic Zebco Company to become more relevant to customers and society.