Partnering for Conservation in the Mimbres River Valley

Partnering for Conservation in the Mimbres River Valley

The Mimbres River flows out of the Gila Wilderness and off the west flank of the Black Range, part of a physiographic province called the Mogollon Rim which spans in a massive arc-shaped form over parts of New Mexico and Arizona. The river pours off the mountainsides and through canyons before feeding fields of alfalfa, orchards, pasture and chile. What’s left of the river is soaked up by sun and sand well downstream. The fact that the river naturally terminated on the desert floor leads partly to the valley’s biological diversity, and the Mimbres Valley and its springs are home to Chiricahua leopard frog and Chihuahua chub. The region is also home to a partner-led conservation effort to restore these declining species. 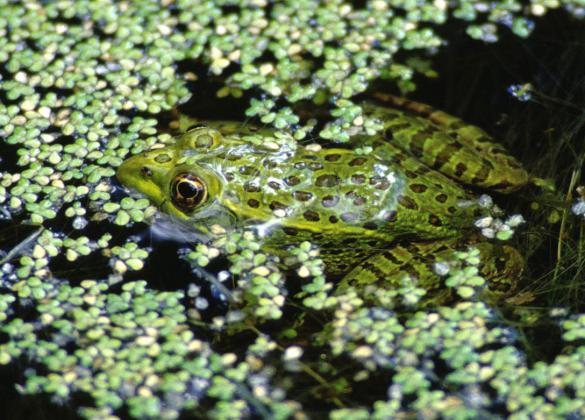 The threatened Chihuahua chub swims nowhere else in the United States, save for the Mimbres. This is a curious artifact of natural history: the shiny chub persists far to the south in the Guzman Basin of Mexico. The native chub must compete for food and space with non-native fishes, and that has contributed to its decline. The Chihuahua chub was thought extinct for many years until it was rediscovered in 1975.

What’s harmed the chub has diminished the number of Chiricahua leopard frogs as well, the lack of habitat. “Mimbres” is Spanish for “willows” and the Mimbres River was at one time profusely lined with willow thickets—a sure sign of soppy soils. Those thickets and soils are fewer and so are the frogs. However, a patch of flat field just upstream from Stitzel Canyon holds the promise of improving the lot of these two animals in great need.

A 208-acre spot of ground owned by The Nature Conservancy encompasses much of Moreno Spring, named for former landowners who left an imprint. The spring emanates over a large spongy area with hummocks of dry ground between pockets of mushy soil with some open waters interspersed. The Mimbres River probably at a time not too distant meandered into the foot of a low bluff where the spring now exists. The spring may be a relic of a former river channel.

That expertise came through Service biologist Angel Montoya. Montoya facilitated the spring rehabilitation alongside Martha Cooper representing the landowner, The Nature Conservancy. The project yielded more fish and frog habitat—habitat used by a litany of other creatures as well such as bears, javelina, deer and waterfowl.

“The return on investment was significant,” said Montoya. “You could see right away dramatic results; the leopard frog responded and chubs swim in the open-water pools and the spring-run to the river.”

What had been akin to a bog was transformed into a glade with a dozen pools of varying sizes, shapes and depths. Chiricahua leopard frogs have more habitats to loaf and breed, and deeper water where they dive to escape predators. The spring has a reliable open source to the Mimbres River where Chihuahua chub can swim to and from.

The U.S. Fish and Wildlife Service’s Southwestern Native Aquatic Resources and Recovery Center in Dexter, New Mexico, remains pivotal in the conservation of Chihuahua chub. Some 400-plus individual fish are held on station at present. These are the brood stock used to produce future fish that make their way back to the Mimbres River. Since 1992, the federal fisheries facility has stocked 50,385 Chihuahua chub into the Mimbres to augment the natural population. The facility is also a refuge of sorts, a place to ensure the security of the rare fish in time of need. Witness the devastating Silver Fire of 2013 that sent slugs of ash flowing down the Mimbres River.

Inspired by the work completed and the conservation benefits readily apparent, the New Mexico Department of Game and Fish amplified what had been done. Using a State Wildlife Grant through the Service’s Wildlife and Sport Fish Restoration Program, more chub and frog habitat was added along the Mimbres River.

“Backhoes using rock, trees and root masses reconfigured river banks toward a natural shape and reconnected the Mimbres to the floodplain,” said Cooper. “Small, off-channel ponds built on the floodplain next to the river are prime habitat for Chiricahua leopard frog. They will offer frogs much-needed safe refuge during high flows.”

Cooper notes another benefit. Water slowed up in soppy soil and off-channel swales keeps the water on the land a little longer. That’s good for wildlife—but it’s also good for people downstream—particularly those who irrigate crops.

You can learn more about conserving wildlife on your property, be it game animals or imperiled species, through the Partners for Fish and Wildlife Program, or contact Matt Filsinger, 703-358-2011.