Currently, little is known regarding the status of the state-endangered longnose darter, one of Oklahoma’s rarest fish species. Longnose darters were known to be found in two river systems in Oklahoma but are believed to have been extirpated from the Poteau River system. Darters such as this are indicators of habitat quality and their loss is usually a sign of larger alterations in the watershed. Lee Creek is one of Oklahoma’s six rivers designated as “scenic” by the Oklahoma Legislature and this designation helps ensure quality habitat, which could help explain why longnose darters continue to inhabit Lee Creek. Researchers at the Oklahoma Cooperative Fish and Wildlife Research Unit are developing an environmental niche model in Lee Creek for use in determining the presence of longnose darter in the Poteau River system. 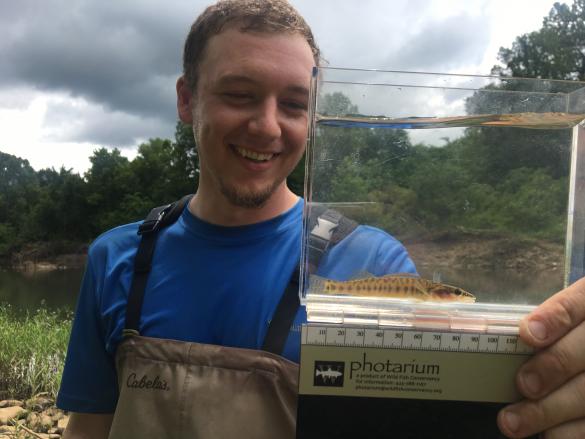 Environmental niche models are used to predict distributions and potential occurrences of species. By mapping habitat in the Poteau River system, the Oklahoma CRU will then transfer the niche model from Lee Creek to produce a potential distribution map in the Poteau River system and use it as a sampling design to search for longnose darters. This project will demonstrate the ability of niche modeling to predict occupancy in previously unsam­pled locations. This is particularly useful for rare species, where large investments in sampling effort may produce few results, thus conserving fiscal and human capital.

Using the niche models, researchers identified 16 reaches in Lee Creek and Blackfork Creek, a tributary to the Poteau River and a stream where longnose darters were transplanted in the early 1990s, and conducted sampling in summer 2017 to determine the status of the fish in each system. Longnose darters were found in Lee Creek, but not Blackfork Creek. Additionally, models suggested that detecting longnose darters, when present, would only occur on average 5 percent of the time, suggesting that many samples are needed before their true absence can be ascertained. Other darter species in these systems had much higher detection estimates, from 10 percent to 40 percent, demonstrating that longnose darters are more rare and harder to document than others.

In the future, researchers plan on conducting sampling in the spring, during the spawning season, when longnose darters might be susceptible to capture, thereby increasing the odds of their detection. These results can then be used by management biologists to help search other systems for the presence of this endangered species.