Songbirds Soaring Off the ESA

Songbirds Soaring Off the ESA

In mid-April, the U.S. Fish and Wildlife Service made announcements about the status of two migratory songbirds. On April 11, the agency announced that it is proposing to delist the Kirtland’s warbler. This was followed just two days later with the announcement that the black-capped vireo no longer needs Endangered Species Act protection. 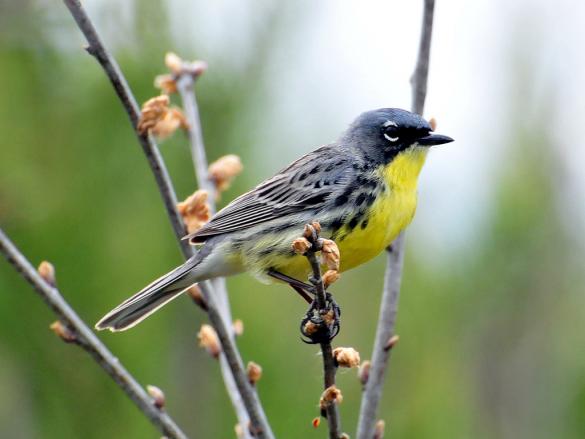 “Kirtland’s warblers were once on the brink of extinction and one of America’s rarest birds, but today they represent the power of partnership to recover imperiled wildlife,” said Tom Melius, Midwest Regional Director for the U.S. Fish and Wildlife Service. “Without a doubt, this bird’s recovery is the result of cooperation among states, local residents, federal agencies and conservation groups. This dedicated conservation community is committed to addressing the needs of the Kirtland’s warbler into the future.”

The Kirtland’s warbler is a small songbird that nests in young jack pine forests in northern Michigan, Wisconsin and Ontario, Canada. This warbler has one of the most geographically restricted breeding distributions of any bird in the continental United States.

The Kirtland’s warbler population declined primarily for two reasons: loss of nesting habitat and brood parasitism caused by the spread of brown-headed cowbirds, which significantly reduced nesting success. After listing the Kirtland’s warbler as endangered, a recovery team was formed that included state and federal agencies and multiple partners. The team prepared the first Kirtland's Warbler Recovery Plan, which outlined steps to increase the species’ population.

The U.S. Forest Service and Michigan DNR developed an intensive habitat management plan to implement the nesting habitat management phase of the recovery plan. Additional state forest and national forest lands were added through the 2000’s to bring the total public land specifically managed for the Kirtland's warbler to more than 210,000 acres. Along with habitat management, a cowbird control program continues throughout the known nesting areas.

Before making a final decision on the delisting proposal, the FWS must gather and analyze public comments and any new information. Publication of the proposed rule opens a 90-day public comment period, which closes on July 11, 2018. To submit comments electronically visit http://www.regulations.gov and enter FWS–R3–ES–2018–0005 in the search box.

On April 13, the U.S. Fish and Wildlife Service announced the recovery of the black-capped vireo, removing Endangered Species Act protection from the southwestern songbird. Only about 350 birds were known to exist in the late 1980s and it was added to the endangered species list in 1987. However, ESA protection and active partner-driven conservation efforts resulted in a resounding success with more than 14,000 birds estimated across their breeding range of Oklahoma, Texas and Mexico.

“Anytime we are able to successfully recover an imperiled species and see it removed from the endangered species list is cause for celebration,” said Carter Smith, Executive Director of Texas Parks and Wildlife Department. “What made it all work were the tireless efforts and dedication of multiple public and private partners, particularly the commitment of private landowners who labored diligently to restore and enhance habitats to benefit the vireos and a host of other native species in the process. The conservation lesson learned here is that marriage of good partnerships and good land stewardship produces results we can all be proud of.”

The FWS worked closely with the states of Oklahoma and Texas to address the primary threats to the bird – habitat degradation and nest parasitism by brown-headed cowbirds. During this time, there was significant number of goats on the landscapes preferred by the vireos in Texas resulting in the loss of shrubby habitat that the bird requires. Conservation efforts focused on managing cowbirds, restoring habitat, and decreasing densities of goats in Texas. Specific actions included the use of prescribed fire as well as conservation easements working closely with partners such as the U.S. Army, the U.S. Department of Agriculture, The Nature Conservancy, the Environmental Defense Fund and others. The FWS Species Status Assessment found that these efforts resulted in a reduction or management of the primary threats to the vireo allowing populations to be viable into the future.

The agencies and partners will now proceed into a post delisting monitoring effort to ensure that their conservation efforts continue to be effective. The post delisting plan outlines how the species and its habitat will be monitored over the next 12 years and provides a strategy for identifying and responding to any future population declines or habitat loss.