Does What Goes Up Also Come Down? A Management Tool to Explore Alewife

Does What Goes Up Also Come Down? A Management Tool to Explore Alewife

Researchers at the USGS Maine Cooperative Fish and Wildlife Research Unit (Maine Unit) developed a model to explore alewife population and nutrient dynamics. Anadromous fish play an important role in coastal ecosystems. This model estimates population abundance as well as nutrient import and export, and can be used to test sensitivities to varying passage rates at dams within a river system. 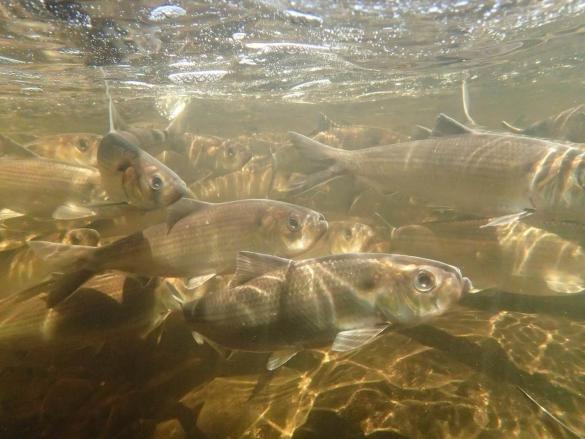 While barriers to migration have led to dramatic population declines throughout coastal New England, a recent resurgence in alewife abundance has occurred in Maine. Alewives migrate into freshwater to spawn in slow-moving areas such as lakes and ponds, providing nutrient inputs in the form of gametes, excretion, and carcasses. Juvenile alewives rear in freshwater for several months, migrating back to the ocean in the late summer and early fall.

In a recently published article, model results indicated that theoretical net nutrient balance for alewife populations in the absence of passage impediments was dependent on the magnitude of adult escapement relative to the habitat’s carrying capacity for juveniles. At low escapement levels and assuming complete habitat access, the number of recruits produced per spawner was high and juvenile nutrient export dominated. At high escapement levels, fewer recruits were produced per spawner because recruitment is density dependent. As a result, adult nutrient import dominated. At varying levels of freshwater productivity and fisheries mortality for upstream spawners, this trend remained the same while the magnitude of the endpoints changed. Productivity level was the major determinant of export, while fisheries mortality had the strongest effect on adult import.

As part of her dissertation, Betsy Barber at the Maine Unit explored alewife population and nutrient dynamics in the St. Croix River, which forms part of the border between Maine and New Brunswick. Access to historic habitat has recently been re-established for alewife, but many questions remain about how passage success will lead to population growth.

Now as a post-doctoral associate with Joseph Zydlewski, Assistant Unit Leader, Maine Unit, Betsy is using the alewife model to explore passage scenarios and address potential management objectives. A web-based application is being developed using the R-package that will provide managers with the tools necessary to compare population changes based on specific passage scenarios.

As alewife populations continue to increase in Maine, researchers at the Maine CRU intend to use this web-based application to explore population dynamics in multiple watersheds. Access to this tool will allow managers to test sensitivities and inform decision-making as Maine fisheries agencies work with companies and communities on issues related to dam passage.