Little is understood about the behavior, location, and habitat preferences of juvenile Gulf sturgeon. To learn more about this prehistoric fish, the Florida Cooperative Fish and Wildlife Research Unit at the University of Florida, the National Oceanic and Atmospheric Administration, and the U.S. Fish and Wildlife Service are studying Gulf sturgeon in the Choctawhatchee River, one of seven freshwater systems stretching from the Pearl River in Louisiana to the Suwannee River in Florida. The Pascagoula, Escambia, Yellow, and Apalachicola rivers are the other four waterways being researched. 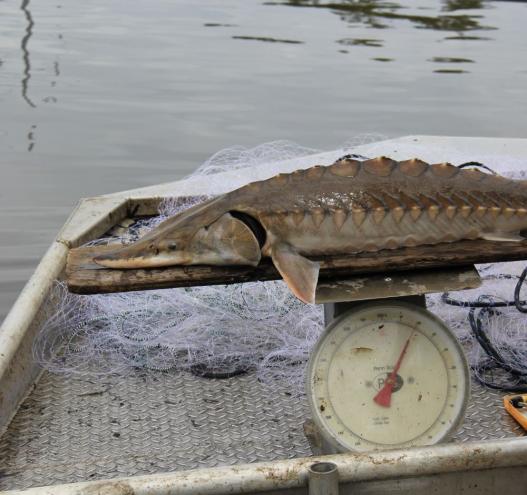 Lying on their stomachs, gloved researchers heave a gargantuan fish up from a muddy river deep in the heart of the Florida panhandle. Armored with bony scutes protruding from sandpaper skin, the primitive-looking fish is swiftly untangled from the mesh net that ensnared it. Taking up the width of the bow of the 20-foot metal skiff, they lift and place the mammoth beast in a live-well tank filled with water. The team of scientists was actually hoping to snag something smaller—a young sturgeon under two-and-a-half feet.

Young Gulf sturgeon remain in rivers and estuaries for two to three years after they’re born. Within the first year of their life, juveniles begin foraging in the estuary during the winter and re-enter the river in the spring. Adult Gulf sturgeon spend the winter months feeding on marine worms and shrimp in the Gulf of Mexico and then swim upstream into the river systems of the southeastern United States seeking out rocky bottoms to spawn.

Based on the juvenile Gulf sturgeon data gathered in the Florida CRU study, fishery managers will identify appropriate strategies to improve species recovery. The researchers are tracking juvenile movement with acoustic telemetry, where strategically placed stationary telemetry receivers sense fish with implanted sonic tags as they swim past. The sound frequencies travel between the fish and the underwater receiver and a signal is recorded, like a car with a transponder passing through an electronic toll booth. This technique yields tens of thousands of detections with minimal effort, and it enables researchers to see when and where juvenile Gulf sturgeon are in the estuary and river.

Additionally, all six research teams are evaluating Gulf sturgeon populations in their rivers by collecting information such as length, weight, and age. With age and size data, the team can estimate how fast sturgeon are growing in different systems and how that relates to temperature, density, or food resources.

The mix of juveniles, intermediate-aged fish, and older adults is likely to vary among the rivers.

Over the project’s four years of gathering information on Gulf sturgeon age, sex, survival rates, and abundance, the UF research team will examine these patterns in the Choctawhatchee River to inform conservation efforts for this remarkable species.