The USGS Maine Cooperative Fish and Wildlife Research Unit is collaborating with faculty and graduate and undergraduate students in wildlife ecology, remote sensing, and computer science at the University of Maine to investigate the efficacy of using a variety of data collection approaches to survey colonial nesting birds in Maine. This study evaluates data collection platforms (plane, unoccupied aerial vehicles (UAV), ground surveys), data types (multi-platform imagery, real-time observations), and data collection protocols (e.g., UAV speed and altitude) for surveying nests and attending birds. The research team is developing protocols to collect imagery with UAVs with minimal disturbance to birds and to manually interpret the images. 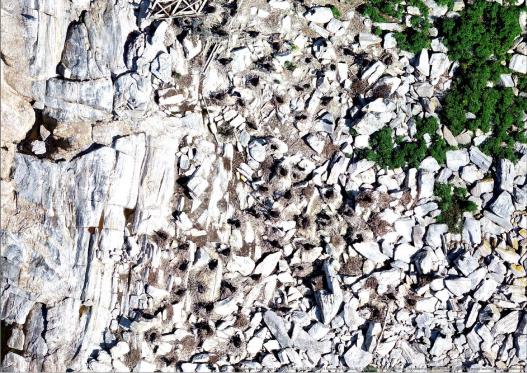 Double-crested Cormorants nesting on one of Maine's coastal islands.

Maine harbors an array of colonial seabirds and wading birds that nest each summer on coastal islands and inland wetlands. These species are considered sentinels of marine and coastal environments, where shifts in fish stocks, pollutants, and habitat alteration can affect nesting success of these birds. Widespread and long-term monitoring of these species can provide data to understand avian population trends and provide insights into patterns at ecosystem level scales. This information can be considered when establishing management goals for avian species and habitat conservation. Logistical and financial constraints can prevent annual surveys for many species; developing technologies to mitigate those constraints is an active area of research.

Traditionally, colonial birds have been monitored using ground or aerial counts, and for some species by manually interpreting imagery collected from planes. Ground counts disturb the colony, which can affect nesting success. Flushing caused by researcher presence, for instance, exposes eggs and chicks to predators as well as the elements, and can lead to colony abandonment. Furthermore, access to colonies to conduct counts can be limited; the remoteness that may afford these species some protection from predation also makes the colony difficult and sometimes dangerous for biologists to navigate. Aerial surveys to obtain counts are subject to detection errors attributable to animal size, coloration, and even habitat use. Visibility and detection errors may be countered with imagery; however, image interpretation can take hundreds of hours depending on site characteristics and the abundance of species of interest. Plane-based imagery collection is also constrained to a snapshot in time, limiting inferences on colony success within a breeding season. These logistical challenges incentivize finding novel approaches for surveying colonial nesting birds.

UAVs have attracted recent attention for their utility in wildlife surveys. Lightweight, programmable for automated flight, and able to accommodate navigational and photographic instruments, UAVs offer an alternative to plane and ground surveys. Images captured by UAVs are often at a greater resolution than plane-based images given the lower UAV flight altitude. However, like any technology, there also are costs associated with their use, including potential disturbance to the target species. Furthermore, UAV-based images also must be interpreted, which may require significant time and labor. Increasingly, artificial intelligence provides an avenue for automating image interpretation, however, open-source platforms that identify species to behavior are lacking.

The large amount of UAV-collected imagery with concurrent ground counts provides an opportunity to create and evaluate an artificial intelligence platform capable of identifying and counting colonial nesting birds recorded in aerial imagery. The team is developing machine learning techniques to estimate numbers of birds by species and behavior (e.g., nesting, roosting, flying) and in various contexts, while also assessing benefits, risks, and efficacy of the automated technologies with respect to disturbance, response of the focal species, detectability, and error estimation. Understanding error associated with any survey approach is an important part of population monitoring. The researchers are assessing errors attributable to each data platform, the UAV- and plane-captured imagery, the ground counts, and the AI algorithms so that advantages and disadvantages of each methodology can be considered when developing monitoring plans with these approaches. Eventually, the team will develop a set of comprehensive protocols for surveying colonial birds with UAVs, ground counts, and machine learning derived algorithms, as well as a computer user tool for biologists and citizen scientists that speeds up counting birds from aerial imagery. This work also provides rich opportunities for students to learn about coastal ecosystems and the science that informs resource management as well as how to work effectively in a transdisciplinary team, while engaging biologists and coastal communities in emerging computer science technologies.