On December 15, 2020, the U.S. Fish and Wildlife Service (Service) found that adding the monarch butterfly to the list of threatened and endangered species is warranted but precluded by work on higher-priority listing actions. With this decision, the monarch becomes a candidate for listing under the Endangered Species Act (ESA), and its status will be reviewed each year until it is no longer a candidate. 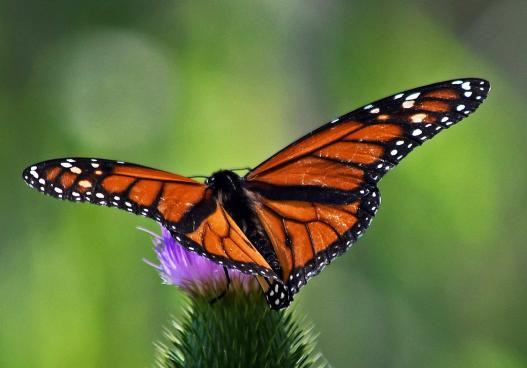 In 2014, the Service received a petition to list the species and published a substantial 90-day finding in December 2014. In 2016, the agency began an in-depth status assessment, looking at the global population as well as focusing on monarchs in North America, where 90% of the world’s population occurs.

The Service prioritizes work on imperiled species through its National Listing Workplan. Currently, listing actions for 161 species on the workplan (64%) are a higher priority than the monarch. These species include plants, insects, freshwater mussels, fish, birds, and mammals. Obligations to meet court orders and settlements due to litigation can affect when the agency works on some species.

Robust conservation efforts are ongoing across the continent, including partnerships with states, tribes, Canada and Mexico, local communities, and conservation organizations, to address threats to the monarch and to bolster milkweed abundance and other habitat needs.

The Midwest Association of Fish and Wildlife Agencies (MAFWA), working with state agency partners in the northeast and south-central US, created the MidAmerica Monarch Conservation Strategy to address monarch issues in the Midwest and the Northeast United States. Similarly, the Western Association of Fish and Wildlife Agencies (WAFWA) created a working group to develop a plan for monarch conservation.

“The Association of Fish and Wildlife Agencies has been working side-by-side with the U.S. Fish and Wildlife Service on voluntary monarch butterfly conservation since 2014. We’ve made great strides, including raising awareness and restoring key habitat, but we still have a long way to go for a sustainable, long-term impact. Moving forward, we’ll continue to be a close partner in our collaborative efforts to restore this iconic species,” stated Sara Parker Pauley, Director of the Missouri Department of Conservation and President of the Association of Fish and Wildlife Agencies in the FWS press release.

By Bill Moritz; Excerpted from various press releases including the U.S. Fish and Wildlife Service press release on December 15, 2020.