We have heard stories about how wildlife species were decimated over a hundred years ago and how sportsmen pulled them back from the brink. We’ve also probably repeated this message in defense of hunting, but how many of us fully understand what this means beyond the sound bite? 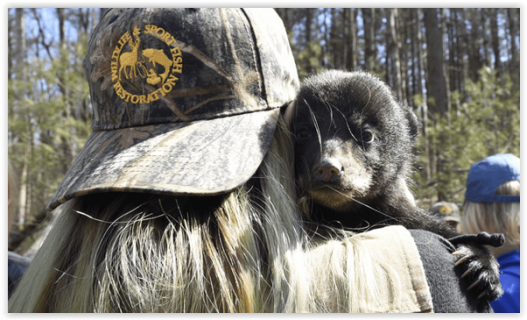 In the early 1900s, it was rare to see a deer and hundreds of other species were in jeopardy. But conservationists believed that investing in science-based wildlife management could bring these species back. Industry, sportsmen, garden clubs, and other allies rallied around legislation to redirect an existing tax on firearms and ammunition for species restoration. Widely known by the names of the bill’s authors, Nevada’s Key Pittman and Virginia’s A. Willis Robertson, the Pittman-Robertson Federal Aid in Wildlife Restoration Act was passed in 1937.

The boost in funding for state-based wildlife management did its job. Wildlife species recovered to a point where science-based regulated hunting could manage sustainable populations.

But what does “science-based wildlife management” really mean? One species – black bears – provides a fascinating case study in this national conservation success story.

Black bears were once widely distributed throughout the forests of the United States but saw broad population declines and were extirpated in many areas by the mid-1900s. Today, bear numbers have rebounded in about 60 percent of their historical range and research conducted in part with Pittman-Robertson (P-R) shooting sports excise tax funding has been used to guide black bear management decisions throughout the country.

Laura Conlee, the furbearer biologist with the Missouri Department of Conservation, has reviewed the history of states using P-R funding for black bear management. The earliest funding went to West Virginia in 1957 and was used to determine normal life expectancy and seasonal movements, resulting in the capture of three female bears the first year. By the 1970s and 80s, black bear restoration efforts began in earnest and over the last 10 years, 17 states have used P-R funds for 87 bear research and conservation projects. Excise tax funded bear research has taken many forms, including survival and recruitment studies to gain insight into population dynamics, hair snare studies used to develop population and density estimates, mast surveys to assess food abundance and variability, and collar studies to assess movements and habitat use at multiple scales.

One form of research conducted by bear biologists is to monitor the dens of hibernating radio collared female bears to check their fitness and reproductive success. After sedating the female, they take her out of the den to check weight and replace her radio collar. They also see how many cubs she has and how healthy they are, the cubs are then marked with microchips for observation in future years. Cubs will be back with their mother in the den in their second year which allows the biologists to estimate first year survival rates.

“States have used P-R funding for all different types of research and much of the data has been used to help drive management decisions,” Conlee notes. “States have put in the work to conserve bears in the multi-faceted way that was needed to recover this species.”

According to Colleen Olfenbuttel, the black bear and furbearer biologist with the North Carolina Wildlife Resources Commission, there was a proposal in the 1970s to list black bears as threatened species in North Carolina. The state realized that there was a huge data gap and that conducting research and surveys would help make informed decisions on managing a sustainable population. In 1976, the state created a Bear Cooperator program where hunters would check in their harvested bears and provide one of the bear’s teeth in order to evaluate age structure within the population and determine trends.

“North Carolina has always maintained a bear hunt and bear hunters were our original ‘citizen scientists’ that allowed us to gather critical information that guides our management programs,” said Olfenbuttel.

The state’s research projects adapted to evaluate reproductive success and survivorship as bears expanded into more suburban areas. Today, excise tax funded research shows that about 97 percent of bear mortality comes from regulated hunting, rather than vehicle collisions or “problem bears” killed due to human conflicts.

According to Olfenbuttel, this is great news, “I can regulate levels of hunting mortality, but I can’t affect other forms of mortality. Our bear cooperator program and research allow us to manage a sustainable population.”

In North Carolina and elsewhere in the United States, many families utilize bears as wild food as part of their diet. Hunters also share harvested bear meat with other households in their communities. The equivalent of over 8 million meals of bear meat were harvested in 22 eastern states during the regulated hunting seasons in 2018. In addition, bear hunts benefit rural communities when hunters travel to the area in order to hunt, a consideration that increases tolerance from agricultural producers that deal with crop damage from bears.

Moving to the ‘Burbs

Thirty years ago, when Paul Rego started as a wildlife biologist with the Connecticut Department of Energy and Environmental Protection, there were essentially no bears in the state. Over the course of those three decades, the population has grown rapidly and is spreading throughout the state.

Rego’s research in Connecticut shows that bears are breeding early, having relatively larger litters, and the cubs typically have a high survival rate in the first year. This is because the bears are able to gain weight quickly and attain the breeding threshold at an earlier age. Unfortunately, this is mostly because of more abundant and varied food sources in suburban areas, in particular garbage and birdseed, which can lead to conflicts with human populations.

The Southeastern Association of Fish and Wildlife Agencies has launched a “BearWise” educational campaign to help residents change their behavior to reduce these conflicts. But helping the general public see the value of a regulated hunting season is also bolstered by the P-R funded research. Fully understanding population trends and knowing as much as possible about bears’ lifecycle can help to create public acceptance of sustainable harvest; both Missouri and Connecticut are in the early stages of proposing a bear hunting season.

“Bear conflicts with humans can generate fear that undermines this conservation success story,” Olfenbuttel concluded. “Educating the non-hunting public about how bears are managed will increase tolerance and help to keep bears on the landscape.”

Into the Bear’s Den – Partner with a Payer

Which leads us back to the bear den studies that present an excellent opportunity to see the hunting and shooting industry’s wildlife research in action.

A national program begun by the National Shooting Sports Foundation and the U.S. Fish and Wildlife Service called Partner with a Payer℠, engages industry member to see how your excise tax dollars are being put to work for the future of wildlife and our hunting opportunities. Several agency biologists, including Rego in Connecticut, have participated and hosted staff from firearms companies in the field with them.

“We have had industry partners come with us for the past four years. These field trips provide a great opportunity to share the process and help them understand more about bear biology and what we are learning,” said Rego. “It is always eye opening for the people who join us because there are a lot of preconceptions about bears. Those in the shooting sports industry also leave with a better appreciation for the important role they play in conservation.”

This story reprinted with permission from the National Shooting Sports Foundation.