Fish and wildlife agencies have a public trust responsibility to manage wildlife for the people of our nation. However, the racial, ethnic, and gender disparities between those who are currently engaged with agencies and their programs, and the rest of the population, highlights a fundamental gap in fulfilling public trust responsibilities to all citizens. The long-standing under-representation of women, African-Americans, Native Americans, Latinxs, Asians, and other minorities in the ranks of agencies is widely recognized. Similarly, a disproportionate majority of people who participate in and are directly served by agency programs are white. The disenfranchisement of minorities in conservation reflects a broader issue in the United States, where recent events have refocused attention on social justice, equity, and inclusion for people of color in the United States. Across the country, institutions are being challenged to address disparities in how they treat and serve minorities. Resolving these legacy issues will not be simple or achieved quickly, but those difficulties cannot be an excuse for inaction. In our field, the Fish and Wildlife Relevancy Roadmap provides guidance agencies can use to increase diversity, equity, and inclusion in conservation. 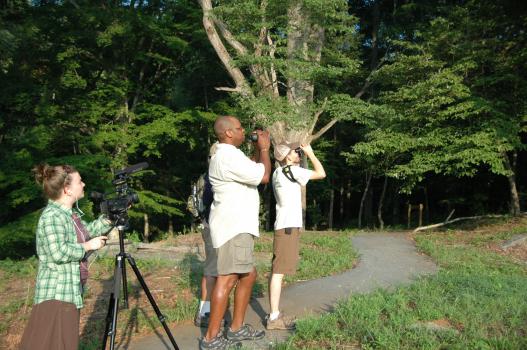 Engaging more people of color in conservation is not simply a matter of inviting others to our table and hoping they will come. People of color often face systemic and long-standing barriers to safe participation in conservation and outdoor recreation. In a moving essay titled, Birding While Black, Dr. J. Drew Lanham, Distinguished Professor of Wildlife Ecology at Clemson University, said he felt compelled to abandon study sites during his doctoral research in a remote corner of North Carolina because he feared for his life based on the color of his skin. He described how a later encounter with three white men who followed him suspiciously while he was conducting field work with a white, female co-worker caused him to question his career choice. Even after years of experience Dr. Lanham expressed continued discomfort while volunteering to conduct breeding bird surveys in a predominantly white area.

Accounts by other people of color at #blackbirdersweek in the wake of Christian Cooper’s experience in New York’s Central Park illustrates that Dr. Lanham’s experiences are all too common. The impact of historic injustice, inequity, and exclusion of minorities on fish and wildlife agencies’ ability to recruit and retain diverse staff and participants in conservation programs is unquestionable. If agencies are to fulfill their public trust responsibilities to all citizens, they will need to address this legacy.

The Fish and Wildlife Relevancy Roadmap, endorsed by the Association of Fish and Wildlife Agencies last September, identified barriers associated with agency culture and capacity, constituent culture and capacity, and legal/political constraints that affect agencies’ ability to engage and serve broader constituencies, including people of color and minorities. The roadmap also provides strategies and tactics agencies can apply to overcome these barriers. Several states are using the roadmap to guide their efforts to increase diversity, equity, and inclusion in their ranks and program delivery.

The Florida Fish and Wildlife Conservation Commission (FWC) is experimenting with “Conversations of Understanding” – multiple, virtual 2-hour meetings with staff through the summer that were prompted by current national racial tensions but have a focus on what FWC can do to create a more welcoming culture. FWC’s Diversity Officer and the FWC Diversity and Inclusion Team are inviting staff to participate in a series of voluntary conversations to surface concerns or issues related to race or diversity in FWC, identify what individual staff members and the agency can do to help create a more welcoming culture in FWC, identify what issues should FWC focus on right now and in the short term, and identify other topics that FWC should address in the future. Employees are invited to dial in if they want to participate in the conversation or just listen and learn. Participants are given guidelines to avoid revealing names or identifiable incidents that may jeopardize staff confidentiality or generate legally obligated investigations. Employees are also reminded about avenues to report cases of racism, harassment, or abuse and the free resources for trauma/grief counseling. While the conversations are lightly facilitated to keep the focus on how FWC can improve moving forward, the topics raised to date have been wide ranging and have been both heart-breaking and up-lifting. FWC will use the topics and suggestions offered in these sessions to inform the work of multiple ongoing priority areas of work to invest in current staff, recruit and retain staff with different interests and experiences, and create a more welcoming agency culture.

With support from a Multi-state Conservation Grant to the Wildlife Management Institute, the North Carolina Wildlife Resources Commission is initiating several efforts to address agency culture and constituent capacity. The agency established a Partnership for Inclusion (PFI) to champion engagement of broader constituencies. Planning is underway for a series of internal workshops designed to help agency staff understand how diversity and inclusion can help the agency achieve its mission. Topics include understanding implicit bias, environmental justice, measurable benefits of organizational diversity, and shifting internal culture. The agency is also developing an outreach and mentoring program targeting colleges and universities that primarily serve students who are under-represented minorities in the agency.

Others are also taking action. The Texas Parks and Wildlife Department (TPWD) adopted a Diversity and Inclusion Strategic Plan to engage diverse employees and communities across the state. The U.S. Fish and Wildlife Service has dedicated funding within the Science Applications program to pilot cooperative efforts that enable students with diverse backgrounds to provide research and applied conservation assistance on one or more regional priority science needs. Several universities are participants in the Doris Duke Conservation Scholars program, a two-year undergraduate research program focused on preparing the next generation of diverse environmental conservation professionals.

Fish and wildlife agencies cannot set themselves apart from the broader social movement underway or expect others to address the legitimate concerns of people who have not been recruited into and served by the conservation community. We must recognize how systemic issues of racial injustice both create barriers for Black people to engage in conservation and outdoor recreation, and also prevent us from fully achieving our public trust missions. The Relevancy Roadmap can help agencies plot a course for positive change.