The USGS Wisconsin Cooperative Wildlife Research Unit, the University of Wisconsin, the U.S. Forest Service, and the U.S. Fish and Wildlife Service, are working with management agencies across the central U.S. to help migratory grasslands birds adapt to a changing world. 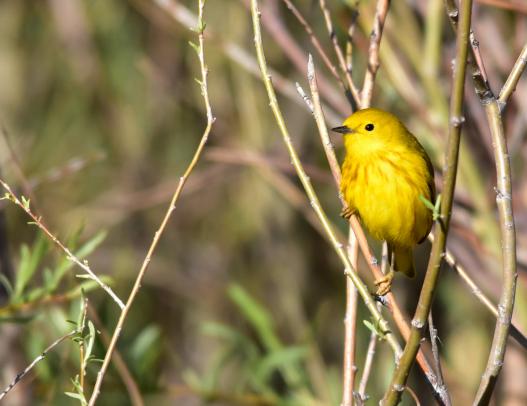 America’s prairies, home to beloved birds such as meadowlarks and mallards, are under threat from human development and climate change.

Hunters and birders alike know to look to the skies when the seasons change.

Whether it is the majestic sandhill crane, the colorful eastern meadowlark, or the common mallard, millions of birds fly across North America each year as part of their seasonal migration. Many follow large migration corridors that carry birds from their winter homes in Central and South America to their summer breeding grounds as far north as Canada.

The Central Flyway, the largest bird migration corridor in North America, stretches from Texas to North Dakota. Grasslands across the Great Plains and the northern Prairie Pothole Region are critical habitats for many birds migrating along the Central Flyway. Yet these landscapes, and the birds that depend on them, are disappearing.

“Grassland birds [have been] the fastest declining group of birds in North America for the last 40 years,” says Benjamin Zuckerberg, Associate Professor in the Department of Forest and Wildlife Ecology at the University of Wisconsin Madison.

In addition to habitat loss from agriculture, grazing, and urban development, grassland birds have been hit hard by climate change. Climate change occurs quickly in flat, low-lying areas, meaning that heat waves, droughts, and extreme weather events have become the new norms for many prairies in the central United States.

“[Grassland birds] have to make a living in a very open and very exposed environment,” Zuckerberg explains. “Clearly this group of species is highly vulnerable to [climate change] effects.”

Zuckerberg and his colleagues Christine Ribic, Unit Leader of the USGS Wisconsin Cooperative Wildlife Research Unit, and Neal Niemuth, Wildlife Biologist with the U.S. Fish and Wildlife Service, are exploring how climate change is affecting migratory grassland birds and what resource managers can do to protect these species.

“What we do for grassland birds is intimately tied to what we do with their habitat,” says Ribic. “We have been doing habitat management for a very long time, so there are a lot of tools.”

In a project funded by the USGS Climate Adaptation Science Centers, the team is digging through scientific literature to summarize everything known about climate change effects on grassland birds in the Central Flyway. They are also meeting with a diverse set of natural resource managers and conservation groups to understand the challenges and strategies for preserving these landscapes under climate change.

“[They were] a really exciting group of people to work with,” says Zuckerberg. “It's always inspiring to see managers who are thinking about how we can help species adapt to a changing climate.”

The team’s main finding: climate change is complicated! How conditions are changing, and how fast, varies dramatically across the country. While some parts of the Central Flyway are in the middle of a mega-drought, others are experiencing unprecedented flooding. Some regions see record-breaking heat, others are slammed by winter storms. (And some have both in the same year!)

“You start to realize that what's important down in the southern part of the Central Flyway is not [necessarily] important in the north. There are different problems,” Ribic says. “The variability is what these managers have to grapple with.”

For managers, this means they must craft conservation strategies based on the needs of their specific birds and landscapes. And yet many existing climate adaptation strategies are broad and vague, making them hard to apply to specific circumstances.

To cut through this complexity, the team is working with the U.S. Forest Service’s Northern Institute of Applied Climate Science to develop a “menu” of conservation strategies for grassland birds. They aim to make the document as actionable and easy to use as possible so that managers can find strategies that meet their specific needs.

“Trying to have this menu that is flexible enough that it can be applied to different geographic, economic, and social settings is one of the real challenges,” Zuckerberg says.

Although this work is ongoing, the team’s efforts are already having real-world impacts. The Nature Conservancy, one of their non-profit partners, recently used their Grassland Adaptation Menu in a planning workshop to develop new management strategies for their properties across the Central Flyway.

Zuckerberg and Ribic, both life-long bird enthusiasts, are grateful for this opportunity to contribute to migratory bird management and conservation. They encourage people interested in grasslands to become aware of conservation efforts in their areas, to remember to “appreciate grasslands as grasslands,” and, of course, to look up when fall or springtime comes.

Written by Jordan Bush, ORISE Postdoctoral Fellow with the National Climate Adaptation Science Center. This work is part of the project “Strategies for Reducing the Vulnerability of Grassland Birds to Climate Change within the Central Flyway” supported by the National, Northeast, North Central, and South Central Climate Adaptation Science Centers.