On May 24, 2022, the World Wildlife Fund-Telmex Telcel Foundation Alliance (WWF) and the National Commission of Protected Natural Areas in Mexico (CONANP), released data from the winter 2021–22 monarch butterfly population counts. Monarchs occupied 2.84 hectares in December 2021, compared to 2.10 hectares at the same time in 2020. This represents a 35% increase. The average for the past decade, from the winter beginning in 2012 to the winter beginning in 2021, has been 2.62 hectares, and the population has been declining since formal measurements were initiated. 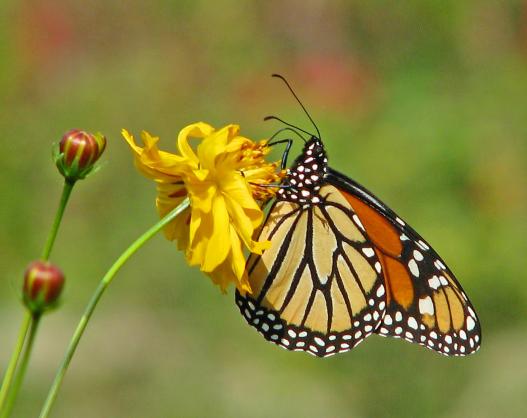 At the wintering sites in central Mexico, monarch population size is compared from year to year by the number of hectares (one hectare = 2.5 acres, slightly less than two football fields) occupied by trees containing monarchs. WWF and CONANP have been systematically monitoring this area since 2004, with similar data from 1993-2003 collected by the Monarch Butterfly Biosphere Reserve (MBBR).

This year’s count of 2.84 hectares (7 acres) of occupied winter habitat is still below the 6 hectare threshold scientists say is necessary for the iconic pollinator to be out of the extinction danger zone in North America. The eastern monarch population is made up of the butterflies east of the Rocky Mountains and accounts for roughly 99% of all North American monarchs. They migrate each winter from the northern United States and southern Canada to oyamel fir forests on high-elevation mountaintops in central Mexico. Scientists estimate the population size by measuring the area of trees occupied by the clustering butterflies.

Monarch butterflies west of the Rocky Mountains overwinter on the central coast of California. The 2022 monarch butterfly news season began with news that the western segment of the monarch population, which migrates along the California coast and numbered about 2,000 butterflies in 2020, jumped to almost 250,000 butterflies in 2021. In a post on the Xerces website titled “The Bounciness of Butterflies,” the invertebrate conservation organization based in Portland, Oregon, acknowledged that insect populations are famously volatile, with extreme fluctuations from year to year, depending on conditions.

Monarchs are currently on the candidate waiting list for Endangered Species Act protection. The U.S. Fish and Wildlife Service has a 2024 deadline to propose them for protection as threatened.