In 2020, at the request of the Southeastern Association of Fish and Wildlife Agencies (SEAFWA), the Wildlife Management Institute (WMI) established a program to test trash containers, coolers, food vaults, and other products for their ability to resist entry by black bears. This program is similar to the ongoing program for grizzly bears coordinated by the Interagency Grizzly Bear Committee (IGBC) that tests similar products on grizzlies. One addition to the black bear program that is not a part of the IGBC program is the field testing of Toxicant Delivery Devices (TDDs) that are designed to selectively feed toxicant baits to feral swine with minimal impact to non-target species such as bears, raccoons, raptors, etc. To carry out this program, WMI will coordinate the testing in alignment with the SEAFWA-developed protocol in captive zoos across the Southeast (for products other than TDDs) and in the wild (for TDDs) in coastal North Carolina. Earlier this summer, WMI completed trial tests at both captive and wild locations to ensure that the protocol is sound and to ensure that the program is ready to become operational. 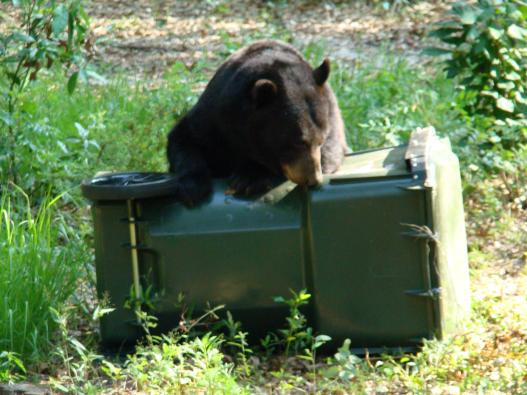 WMI’s Captive Testing Coordinator Patti Sowka assisted and monitored the captive trial at the Oklahoma City Zoo using a sealed plastic drum as a surrogate for an actual product. Captive testing went according to protocol and demonstrated the desired outcome, with some minor issues that will be resolved in the next few weeks. Currently zoos available for product testing include the Oklahoma City Zoo, the Western North Carolina Nature Center, and the Brevard Zoo in Florida. Other zoos may be added to the program as demand dictates.

Based on the Coordinator’s review, WMI has recommended to the SEAFWA Oversight Committee assigned to this program to approve expanding the practice tests to the other zoos, and to begin actual product testing this summer.

For the TDD test trial, WMI staff Jon Gassett coordinated a wild bear test at a location known to have large numbers of both feral pigs and bears in coastal North Carolina with North Carolina Wildlife Resources Commission Field Staff Jason Allen and Chris Turner. The site was established as a test site on May 9 on a privately-owned farm in Hyde County. The selected site was outfitted with an array of four networked cameras to provide real-time monitoring of the site, and four stand-alone video cameras to record activities and times. The practice device used was a 45-gal plastic drum that was chained to a tree and filled with shelled whole corn; the barrel was drilled so that corn would leak out when moved.

The only issue we encountered at this remote location was the poor cellular reception with the real-time monitoring due to the lack of Verizon cell service in that area. Cameras were repositioned several times to attempt to lock in a solid signal; however, the signal was lost two days into the 30-day trial. WMI made the decision to continue running the trial test, even though we lost the ability to monitor in real time.

The test site was left undisturbed from June 9 until June 15. At that time, we returned to the site to examine the collected video footage and to assess the equipment. Of the six cameras (3 network, 3 video) that remained on site, bears had removed four antenna and severed two power cables. All equipment was still operational at that time. 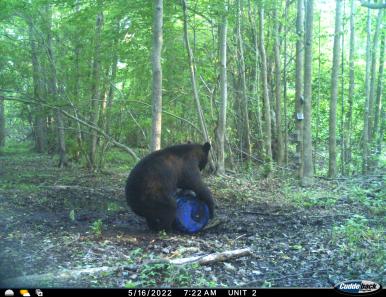 Video and still imagery from the six cameras indicated that species began visits almost immediately (deer arrived within 30 minutes of our departure). Both bears and feral pigs arrived within 24-48 hours. Feral pig activity was constant throughout the trial period with extended visits almost every day. This created a muddy situation around the bait site that remained for the duration of the trial (this meets one of the protocol requirements). Multiple bears visited the site numerous times both between and during the feral pig visits. Based on the video evidence, a 30-day trial period should be more than sufficient to meet the requirements of the testing protocol.

In consulting with the landowner, we discovered that AT&T has much better service in that area, so we are currently working with the manufacturer to convert the transmitter camera over to that service, which should restore real-time monitoring. However, the trial demonstrated the function and durability of the equipment, so that real-time monitoring, while nice, is not mandatory. Camera redundancy, power backups, and bear vaults will allow us to conduct trials on that site in a reasonable time with or without real-time monitoring. 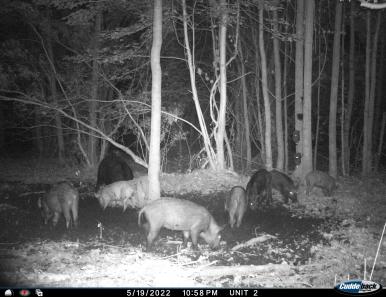 Other minor issues discovered during the trial included bear damage to several power cables and antennas. Because the units contain internal batteries, the power cable damage was not problematic (they feed power to the units from solar panels equipped with a separate battery bank). The internal camera batteries were able to maintain functionality during the trial period without connection to the solar panels. WMI has reached out to the manufacturer, which has provided us with options to “harden” the cables using conduit and longer extensions. Having the antennas removed by the bears was also only a minor issue with the video cameras since they were functioning as standalone and were not transmitting. It could impact the real-time monitoring cameras, but their proximity to each other may allow them to network anyway. We are working with the manufacturer to determine if other antenna options may be more suitable.

Because the redundancies of the TDD camera system worked as designed, and even with multiple, minor issues, we were able to obtain the data necessary to fulfill the SEAFWA testing protocol. Based on the trial conducted by staff, WMI has recommended to the the SEAFWA Oversight Committee assigned to this program to approve actual TDD testing this summer.

Information about the testing project is available on WMI’s website and outreach to the coordinator can be sent to bear-resistant@wildlifemgt.org.