As conservationists create hundreds of acres of young forest each year to provide food and cover for New England cottontails, it is becoming increasingly clear that humans will need to help these rabbits find and occupy new areas. One way to do that – and to boost numbers and health of small populations that already exist in the species’ six-state range – is to release captive-bred rabbits into habitat sites. With the Wildlife Management Institute helping to coordinate efforts, state and federal agencies are working to make habitat for and monitor population numbers of this beleaguered native species through a regional restoration effort that also includes a captive breeding element. 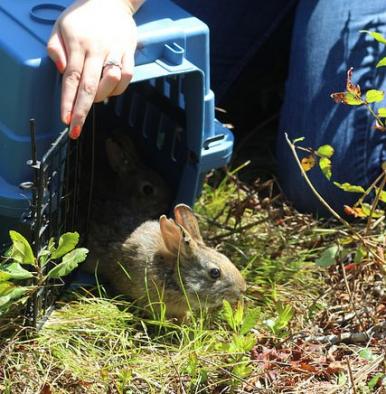 In a paper published recently in the Wildlife Society Bulletin, “Monitoring a New England Cottontail Reintroduction With Noninvasive Genetic Sampling,” researchers with the University of New Hampshire and New Hampshire Fish and Game report on the outcome of the reintroduction effort after five years, including how rabbits used the habitat and reproduced. Their findings stem from analyzing genetic material gleaned from the animals’ fecal pellets (droppings) recovered in the field during winter, with a dual goal of learning whether the introduced rabbits had reproduced and determining the parentage of wild-born offspring. Biologists also used radiotelemetry to monitor the released animals.

Over five years, conservationists reintroduced 42 rabbits to Bellamy River WMA. Genetic analyses revealed that six of the original or “founder” animals successfully reproduced, as did nine of the 29 offspring that were identified. And it showed that at least one male New England cottontail remained on the site when reintroductions began, with that male siring two offspring.

The survival of released founders ranged from 75 percent during their first year down to zero percent. Predators were the main cause of mortality, with the greatest percentages of rabbits killed during the first month after they were released and in years when there was heavy late spring snowfall and long-lasting snow cover. The average lifespan of a cottontail in the wild is around 15 months.

The researchers found that five to 12 rabbits were living on the site each year. The number of young that were “recruited,” or matured to become part of the population, ranged from three to nine annually. The population stayed fairly stable for the first three years after reintroductions began in 2013, declined in 2017 (a snowy year), and increased slightly in 2018 after the last release of zoo-bred individuals and following the birth of offspring from rabbits that themselves had been born in the wild to founder parents. Some individuals survived and reproduced over several years. Continued reintroductions of New England cottontails were needed to sustain this small population.

The study documented one rabbit dispersing from the release site to another area of high-quality shrubland habitat 700 meters away within the wildlife management area. The researchers write: “This successful dispersal event and subsequent continued occupancy of the new patch exemplify the potential for this reintroduced population in the longer term to occupy a landscape” through reproduction, as well as movement into areas of good habitat using corridors of equally good habitat that allowed rabbits to move about without being killed by cars or predators.

The researchers point out that annual genetic monitoring through analyzing fecal pellets found in winter lets biologists carry out “adaptive management responses, such as releasing more females after genetic monitoring revealed a male-biased sex ratio” at any given time. The monitoring also lets conservationists add new individuals to expand a population’s genetic diversity and to lessen any negative health outcomes resulting from inbreeding.

They believe that tracking the Bellamy River reintroduction through genetic monitoring “has produced insights to guide further reintroductions of New England cottontails.” They suggest that “expanding existing metapopulations may be more successful than trying to re-establish populations in isolation,” if there are no other rabbits nearby that can supplement the isolated populations through natural dispersal.

They conclude that “Ultimately, reintroduction efforts should aim to restore a self-sustaining metapopulation that includes multiple occupied patches within dispersal distance” (less than 2 kilometers) “in a landscape conducive to dispersal, conditions that historically supported New England cottontail populations and offset local patch extinctions.”