How does a state agency concerned about the future engage youth and young adults? If you’re the Missouri Department of Conservation (MDC) and the Nevada Department of Wildlife (NDOW), you connect with MOJO Ad, a student-staffed advertising agency in the School of Journalism at the University of Missouri. MOJO Ad specializes in all things young. Last Fall, three teams of students with diverse backgrounds reviewed MDC and NDOW programs and conducted surveys of people’s attitudes, behaviors, and beliefs. Results of the survey revealed that youth and young adults (YAYAs) are significantly different from older Americans, including Millennials and Generation X. YAYA individuals have lower trust in the media to provide honest news and less faith in governments to address social and environmental issues. Nevertheless, YAYAs have deep, personal commitments to improving the future through collaborative action. Armed with this information, each of the three teams developed an outreach campaign designed to show YAYA individuals the importance of conservation and ways to connect with MDC and NDOW. 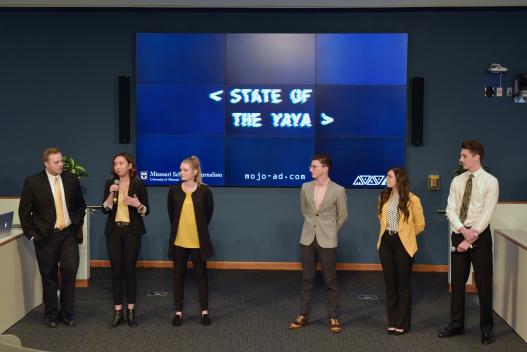 For more than a decade, fish and wildlife agencies have been seeking ways to maintain relevancy with the public they serve in the face of social and economic changes. Last year, the Association of Fish and Wildlife Agencies adopted the Fish and Wildlife Relevancy Roadmap that provides general guidance for engaging and serving broader constituencies. To help develop specific action plans aimed at a target demographic, MDC and NDOW contracted with the University of Missouri School of Journalism’s MOJO Ad program to survey youth and young adults in order to develop ways to engage them in conservation. With over 31 million individuals between the ages of 18 and 24 in the U.S. and an aggregate income of $463 billion, YAYAs make up a vital part of the U.S. population. Equally important, over the next decade these young people will play a vital role in how society responds to present and future conservation challenges.

The MOJO Ad program recruits students with a keen interest in marketing, advertising, and public relations to work on teams in a real world setting, conducting research and developing campaigns for clients including major corporations. After seeing what MOJO Ad did for Chevrolet last year, MDC and NDOW reached out to the UM School of Journalism to see if this year’s students would take on the task of helping the agencies better understand YAYAs and ways to engage with them regarding agency work, the outdoors, and conservation. Jon Stemmle, Director of Operations and Research and Jamie Flink, Associate Professor in Strategic Communications at UM, assembled three teams of enthusiastic students with diverse backgrounds to take on the project.

The teams worked together to conduct two surveys of people’s attitudes, behaviors, and beliefs. One survey sampled the general population across the nation and one sampled 18 to 24 year olds in Missouri and Nevada. The teams produced a “State of the YAYA – 2020” report with insights into how YAYAs get informed, view their responsibilities as citizens, what they think about social and political issues, how they manage their time and money, and how they view the future. Among the most important findings are that YAYAs trust the media to provide accurate, unbiased news even less than slightly older generations including Millennials and Generation X. In response, YAYAs seek information on numerous social media platforms daily and do their own fact checking. They have little faith in government or current political structures to address the issues most important to them: social justice, discrimination, and their economic opportunities.

Although YAYAs’ lifestyles center on social media and demands on their time leave limited opportunity to get outside, many have a strong interest in environmental issues including climate change and preservation of species and habitat. They are personally committed, but many lack awareness of opportunities to engage in outdoor activities or contribute to conservation.

The teams worked independently to develop three different approaches to reaching YAYAs and connecting them with nature and the agencies. One team focused on tapping into individuals’ childhood memories of times spent outdoors with family. Their “Nostalgic by Nature” strategy was designed around a theme called “Never Lose Touch” that used images and language designed to reach YAYAs on an emotional level. Another team targeted “Rooted Luminary” individuals who associate nature with quality time and strengthening connections with the people they value most. The third team oriented their campaign toward “Divergent Defenders” who displayed strong attachments to the environment, asking them to write and share thank you notes to Mother Earth to restore their connections with nature. Because a significant portion of the population in Nevada and a growing number of Missouri residents are Hispanic, the teams provided materials in both English and Spanish.

All three teams developed ways to integrate multiple social media platforms (e.g. Facebook, Twitter, Instagram, Snap Chat, TikToK, etc.) into agency outreach efforts. Different platforms are most effective at different stages of the engagement process, so agencies need to have a presence on each to maximize impact with young people.

The teams recently gave live, online presentations of their campaigns to MDC and NDOW staff. Jennifer Newmark with NDOW said the presentations were so professionally done it was hard to believe the team members were still students, not seasoned professionals. NDOW Director, Tony Wasley said there were parts of each team’s work that could be woven into his agency’s implementation of the Relevancy Roadmap. Jason Sumners, MDC Science Branch Chief, noted that the ideas and elements of the campaigns were helpful in reiterating the importance of segmenting, knowing your audience(s), and crafting outreach aimed directly at each.

“These students have their pulse on the youth and young adult market, including their research and thought-provoking messaging,” commented Sara Parker Pauley, MDC Director. “This greatly helps our agency think outside the box on how we make these important connections with new and diverse audiences.”

The inspirational, “outside the box” campaigns developed by the teams may challenge some current agency staff thinking. Embracing the new, post-COVID future and engaging the next generation of conservationists will require agencies to try new approaches. To paraphrase Darwin, it is not the strongest agencies that will survive; it is those that can best adapt to change.