Conservation Words That Work: Determining How to Engage the American Public Through the Language of Conservation

Conservation Words That Work: Determining How to Engage the American Public Through the Language of Conservation

The Wildlife Management Institute (WMI) and Responsive Management have just completed a new Multistate Conservation Grant study on the conservation words and phrases that resonate the most with the American public. The study is predicated on the fact that words matter—that the individual terms and phrases used by conservation professionals to describe their work can mean the difference between concern and apathy among everyday U.S. residents. 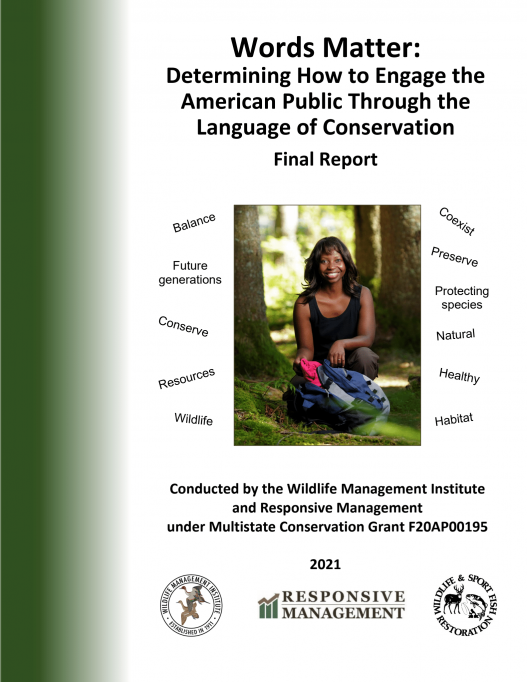 Persuasive communicators routinely employ specific words and phrases to guarantee maximum impact in the framing of concepts and ideas. Consider the differences between competing terms like “assault rifle” and “modern sporting rifle,” “death tax” and “estate tax,” and “gun control laws” and “gun safety laws.” In each instance, key terms and descriptors are used to elicit the greatest support (or opposition) possible.

The task of the conservation community is no different: when communicating about the purpose and benefits of fish and wildlife management, agency professionals must use language strategically to invest as many Americans as possible in the work of the state agencies. As emphasized in the Fish and Wildlife Relevancy Roadmap developed by the Association of Fish and Wildlife Agencies (AFWA) and WMI, effective conservation of fish and wildlife in the United States depends on broader engagement from all Americans.

“In short, words do matter,” notes Steve Williams, president of WMI and former director of the U.S. Fish and Wildlife Service. “As our profession strives to broaden support from and engagement with all the American public, it is important to understand what words resonate with that public. The path toward relevancy includes careful and thoughtful messaging using the terms and phrases identified in this report, words that are easily understood and accepted.”

The challenge to communicate persuasively and effectively about conservation is even more important given a rising overall U.S. population, along with increasing populations of urban, older, minority, and immigrant residents. As determined in recent research by Colorado State University, the Ohio State University, and Responsive Management, changing wildlife values—including a decline in Traditionalist values and a rise in Mutualist values—are also influencing perceptions of conservation and natural resources. And the recent rise in sport shooting participation coupled with generally declining participation in hunting mean that the funding base for wildlife conservation in the United States is shifting. All these trends point to a changing audience for conservation messages and communications, thereby underscoring the need for a research study on conservation words and phrases that work.

To conduct the study, Responsive Management, WMI, and Judy Stokes Weber of Wildlife Conservation Partners first completed an inventory of the conservation words and phrases typically used by state fish and wildlife agencies and major NGOs (including in mission statements, websites, and various public outreach materials) to communicate with Americans. Next, the partners conducted a series of focus groups with general population Americans to explore opinions on the full range of conservation terms and phrases in an open-ended manner. Finally, the study team implemented a scientific survey of more than 2,000 U.S. residents to quantify reactions to a multitude of conservation words and phrases. The survey entailed at least 500 completed interviews in each of the four major AFWA regions and included oversamples of Black and Hispanic/Latino residents. The results were analyzed by AFWA region, age, race, gender, and the wildlife values orientations developed in the Colorado State University study (i.e., Traditionalist, Mutualist, Pluralist, and Distanced).

Among the topline findings from the study:

The full report includes extensive discussions of other findings as well as detailed communications recommendations based on the research.