There is perhaps nothing more evocative of the American West than herds of elk, mule deer or pronghorn moving freely across the landscape, and a new series of detailed maps reveals their migration pathways—thanks to a team of state, federal and tribal scientists. 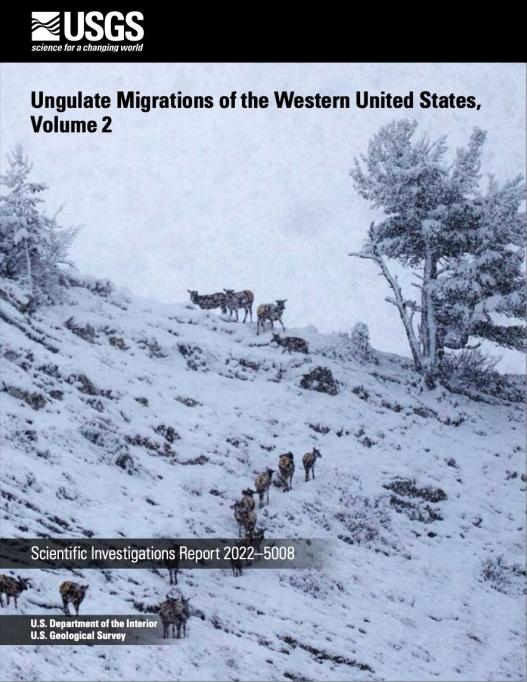 The second volume in a series, the detailed maps will help wildlife managers conserve the big game migrations that support herd abundance and provide cultural significance and economic benefits to regional communities.

“Many ungulate herds have to migrate to thrive on the strongly seasonal landscapes of the American West. These corridor maps make it possible to manage those critical movements,” says Matthew Kauffman, wildlife biologist with the U.S. Geological Survey (USGS) and the University of Wyoming, who is the report’s lead author.

Each spring and fall, ungulates move throughout the western United States in sync with critical food resources. But as the human footprint in the West expands, these species increasingly face obstacles such as new subdivisions, energy development, impermeable fences and high-traffic roads on their long journeys.

These barriers can increase mortality from vehicle collisions and disrupt the historical routes used by ungulates, threatening the long-term persistence of existing migrations. Detailed mapping from GPS collar data, like that provided in the “Western Migrations” report series, helps scientists pinpoint those barriers.

State and tribal wildlife agencies manage most of the migratory herds in the western United States. Biologists have long tracked animal movements as a cornerstone of state monitoring and management, but extracting the most biologically meaningful migration corridors from the tangle of individual animal tracks has been technically complex.

To meet the challenge, a partnership known as the Corridor Mapping Team was established in 2018, leveraging expertise from state wildlife agencies, tribes and the USGS. The Corridor Mapping Team consists of analysts from many western states and tribes, and is led by researchers at the USGS Wyoming Cooperative Fish and Wildlife Research Unit at UW. The team has been key to developing standard techniques for mapping the corridors and making them available to the public.

The team’s creation and dissemination of Migration Mapper software facilitated the production of maps for Volumes 1 and 2 of “Ungulate Migrations of the Western United States.” These mapping approaches -- implemented in collaboration with Wyoming Game and Fish Department and other state wildlife agencies -- have gained traction among western land and wildlife managers.

“The big game corridor mapping program is strongly supported by western fish and wildlife agencies and serves as a model of how empirical science facilitates collaborative, landscape-level conservation efforts through state and federal cooperation,” says Zachary Lowe, executive director of the Western Association of Fish and Wildlife Agencies. “I am hard-pressed to think of many other successful landscape conservation efforts that have garnered such broad support from these diverse stakeholders so quickly.”

Unique from the first volume, the second report in the series includes maps of two mule deer populations that migrate across the Wind River Indian Reservation in Wyoming, which are primarily managed by the Eastern Shoshone and Northern Arapaho Department of Fish and Game. Other new maps delineate migrations that span state boundaries, such as the Sheldon-Hart Mountain pronghorn that move between Nevada and Oregon, and the Paunsaugunt mule deer that migrate between Utah and Arizona.

“This atlas of ungulate migrations is an incredible resource for anyone who cares about the West’s big game herds and the challenges they face,” says Whit Fosburgh, president and CEO of the Theodore Roosevelt Conservation Partnership (TRCP). “TRCP appreciates the commitment demonstrated by the Interior Department, USGS, and numerous western states and tribes in delineating these crucial corridors.”

Many agencies and conservation groups have developed collaborative programs to sustain migrations by building road underpasses or overpasses to mitigate wildlife-vehicle collisions, removing obsolete and impassable fences and protecting agricultural lands from development.

“This migration research comes at a pivotal time as we tackle the threats of nature loss and climate change,” says Jamie Williams, president of The Wilderness Society. “We commend the Department of the Interior for its commitment to strong collaboration with state and tribal wildlife agencies. This report makes the science clear and, with these maps in hand, local communities can work with state and federal land managers to sustain the vital habitats these herds require to move and thrive across the West.”

In addition to managers from the respective state wildlife agencies, report co-authors include the U.S. Forest Service, U.S. Fish and Wildlife Service, National Park Service, Eastern Shoshone and Northern Arapaho Department of Fish and Game, and the Bureau of Land Management. Maps of each herd were produced in collaboration with regional experts by cartographers from the USGS and the InfoGraphics Lab at the University of Oregon. Mapping by partners is ongoing, with a third volume of migration maps currently in preparation.