Hurricane Ian’s Impact to Conservation will be Long Lasting

Hurricane Ian’s Impact to Conservation will be Long Lasting

Hurricane Ian smashed Florida in late September, significantly affecting human lives and well-being. While anecdotal reports of alligators, sharks, and other wildlife in unusual places have been in the news, the impacts of Ian on habitat, animals, recreational access, invasive species, and the fishing industry are still being assessed. Florida’s native wildlife species are well adapted to hurricanes, and species have all kinds of strategies for staying safe or rebounding quickly, but the magnitude of this storm surely had impacts. 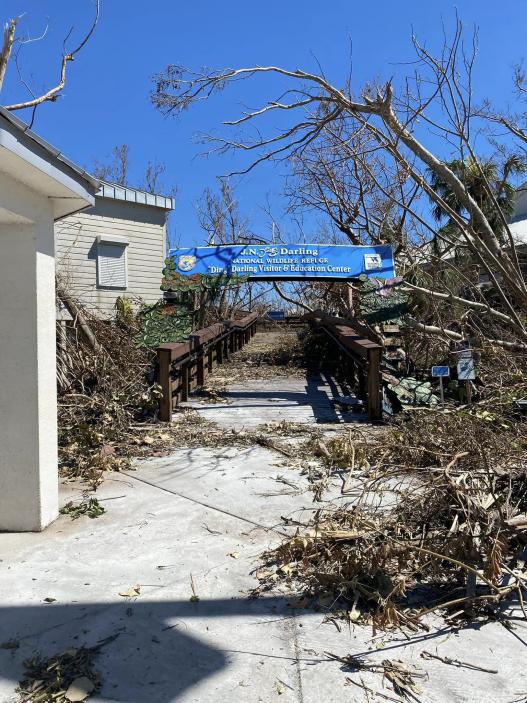 Florida Fish and Wildlife Conservation Commission (FWC) law enforcement officers, with their unique training, experience, and equipment, are often the first to respond following a natural disaster. Hurricane Ian was no different. Soon after Hurricane Ian came ashore in Florida, FWC officers deployed to assist people in need. Approximately 120 FWC officers from areas of Florida not impacted by Ian rushed to affected areas to provide life safety, response, search-and-rescue, humanitarian, and law enforcement response services. A second wave of 61 officers was mobilized as the first group demobilized for a much-needed break.

One of Florida’s most popular birding destinations faces an “immense” cleanup after the hurricane. J.N. “Ding” Darling National Wildlife Refuge sits on Sanibel Island, which took a direct hit from the hurricane. The refuge says on its Facebook page that state and federal agencies are in the midst of “immense rescue and cleanup efforts on Sanibel Island. It is hard to believe the level of devastation that we’re seeing out here.” Photos from the refuge show downed power lines, a boat tossed onto a dock, and barren trees. The refuge is closed because the storm washed away part of the causeway that connects Sanibel to the mainland. This Washington Post story makes it clear that rebuilding the causeway will be an enormous job and that the lack of basic services on the island have made it mostly uninhabitable.

The tidal surge and the large amount of rain that came with the storm certainly affected the habitat, thus causing some species to relocate to unusual areas. Some species, such as sharks and dolphins, may have left the area before the storm hit. Tagged sharks from Sarasota south to San Carlos Bay left the Southwest Florida coast about 24 hours before Hurricane Charley made landfall in 2004. The data showed that the same sharks returned about 24 hours after Charley hit. Manatees can be left stranded when storm surge changes water levels, but the Mote Marine Laboratory and Aquarium reported no manatee strandings in the Sarasota and Fort Myers area after Hurricane Ian.

Female sea turtles nest several times during the summer months, which coincide with hurricane season. To help better their odds of survival, the turtles have adapted by producing multiple nests in cycles. Hurricane Ian hit toward the end of the nesting season, which reduced the impact of the event on turtle nesting.

Florida is home to 1.3 million alligators, and although they rarely attack humans, they can become aggressive if stressed or provoked. The severe weather conditions may mean the animals pose more of a threat to humans than usual. In a press release, the FWC told residents to call officials if they come across a nuisance alligator or alligators that display threatening behavior. In addition, the FWC instituted additional requirements for captive wildlife owners to reduce the threat of escape or injury of captive wildlife after Hurricane Andrew in 1992. Critical Incident Disaster Plans are required for all captive wildlife permittees but there is potential that some individuals did escape in this storm.

For recreational boaters, storms can cause hazardous water conditions by altering the location and condition of pilings, trees, shoals, sandbars, and navigation markers. The FWC recommends that all boaters, as always, should wear lifejackets and that they pay close attention and should expect to find new underwater hazards, look out for submerged navigation aids, and be prepared for changes to water depth caused by shifting sands. If boaters are on the water after sunset, they should observe any curfews in place in the area, elevate their awareness and attention to the surroundings, use navigational lights, and remain at a slow speed. “The FWC takes the quality and safety of our waterways very seriously. We have damaged and submerged navigation markers, displaced vessels and other debris in some waterways that might not be visible. Please use caution,” said FWC Boating and Waterways Section Leader Maj. Rob Beaton in a press release.

Even though habitat was destroyed by the event, some wildlife in the state can benefit from new habitat created by flooding and downed trees. Staff at the Audubon Society’s Corkscrew Swamp Sanctuary situated between Fort Myers and Naples noted the resiliency of the wildlife and habitats to periodic storms.

“Wildlife in Florida’s wetland habitats evolved with and depend on change events like hurricanes.

During a storm, songbirds and other animals find a safe space to hunker down, and between the heavy gusts, venture out to grab a meal. Cypress trees bend and some branches break, leaving needles and other plant debris strewn across the landscape; the remaining canopy has become a burnished brown from the wind but will re-green in the spring.

After the storm, our team of staff and volunteers worked to rescue epiphytes, like orchids and bromeliads, that had fallen on the boardwalk, and carefully placed them back on host trees. Along the boardwalk, our team saw raccoons and deer taking advantage of new food resources revealed by wind and water, while wading birds foraged nearby in shallow wetlands, where they can access fish. Fallen branches and trees create openings for light to penetrate the canopy, allowing understory species to flourish.”