On December 12, the U.S. Congress passed the final conference report of the 2018 Farm Bill; the legislation now moves to the White House and is expected to be signed into law by President Trump. The conference agreement was negotiated by House and Senate committee leaders and a deal was announced on November 29. The agreement went through analysis by the Congressional Budget Office, and then floor consideration was delayed during the national mourning period for President George H.W. Bush before the final conference report and explanatory statement were publicly released on December 10. The Senate passed the bill by a vote of 87-13 the next day followed on December 12 by House passage of the bill by a vote of 369-47. 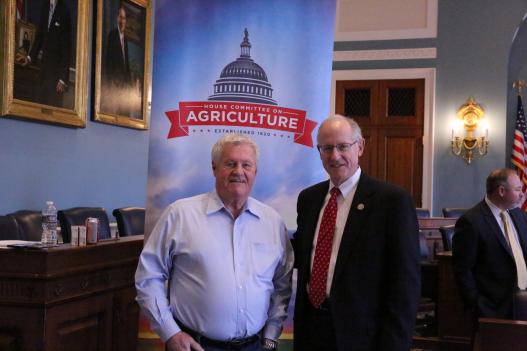 “I am proud of the work we have done to fight for the hard-working farm and ranch families who feed and clothe this nation, to fight for better policy that strengthens the farm safety net and our rural communities, improves conservation initiatives, expands exports and enhances the integrity of our nutrition programs,” House Agriculture Committee Chairman Michael Conaway commented in a press statement.

To the conservation community, the Conservation Title (Title II) of the bill is the area of greatest interest, along with the Forestry Title (Title VIII). Overall funding levels for conservation programs remained roughly the same with some adjustments to programs. In addition, the bill maintains the link between conservation compliance and participation in federal farm programs and continues sodsaver requirements within a limited range of states. There are also provisions within multiple titles that encourage water quality and quantity as well as watershed conservation partnerships.

“American wildlife and landowners need a Farm Bill in place, and we’re on the precipice of that,” said Dave Nomsen, Pheasants Forever and Quail Forever’s vice president of governmental affairs. “Although we’re pleased with the Conservation Title, we are concerned that over the last several Farm Bills, conservation funding and acres have either remained flat, or in cases like CRP acres, reduced. This is the first time CRP acres have increased since the 1996 Farm Bill.”

The cap on the Conservation Reserve Program is raised by 3 million acres from 24 to 27 million acres by 2023, with instructions that 30 percent of acres (8.6 million) be enrolled within continuous CRP (including programs such as State Acres for Wildlife Enhancement, and other practices like CP33 that improve wildlife habitat) and 2 million acres devoted to grasslands. The explanatory statement encourages the use of native vegetation for habitat restoration and the agreement provides greater flexibility for haying and grazing on CRP acres (with “appropriate protections to maintain the conservation and wildlife value”). Soil rental rates for general and continuous enrollment are limited to 85 percent and 90 percent of the county average, respectively, and cost-share payments are limited to the actual cost of the practice installation and 50 percent of the cost of seed.

A new pilot program called CLEAR 30 (Clean Lakes Estuaries and Rivers) will allow for a 30-year contract option on sensitive lands such as wetlands and riparian areas. “The Managers would like producers to be given the opportunity to enroll in and capitalize on the benefits of longer-term contracts beyond the traditional 10-year contract, while simultaneously maximizing environmental benefits associated with the CRP. The Managers intend for this pilot to serve as a tool for measuring demand for longer-term CRP contracts and to provide insights into the conservation benefits associated with longterm contracts.” In addition, the bill includes a pilot program for a Soil Health and Income Protection Program in the Prairie Pothole Region. The program offers shorter contracts (3-5 years) “to assist landowners with conserving and improving soil, water, and wildlife resources” which can increase flexibility for early successional grassland habitat projects.

Overall, concerning CRP the explanatory statement reads: “The Managers increased CRP’s annual enrollment acreage cap and reduced the soil rental rate limits in hopes that CRP will more accurately serve one of its fundamental purposes: retiring the most sensitive lands without competing with local farmland rental markets (which may preclude some farmers from having access to prime farmland). By incorporating changes in the program that are more market-based, the Managers are hopeful that highly productive land will not be taken out of production while remaining affordable for those who wish to utilize it for production agriculture.”

The agreement does not eliminate the Conservation Stewardship Program as the House-passed bill did, though it does reduce CSP’s overall funding level to $3.9 billion over five years and moves the funds removed from CSP over to the Environmental Quality Incentives Program (EQIP). The bill allocates $9.2 billion over five years for EQIP and increases the amount available for wildlife-related projects from 5 percent to 10 percent, approximately $200 million per year. In addition, the final agreement increases the total funding for the Agriculture Conservation Easement Program to $450 million per year (a total of $2.25 billion over the life of the bill) and expands and strengthens the Regional Conservation Partnership Program with funding of $1.5 billion over the life of the bill. The bill also increases funding for the Voluntary Public Access – Habitat Improvement Program to $50 million over five years, an increase of $10 million.

In addition, the bill codifies the Working Lands for Wildlife program of the Natural Resources Conservation Service and expands it to the Farm Service Agency for use with the Conservation Reserve Program. The explanatory statement notes: “The Managers recognize the success of the Working Lands for Wildlife model of conservation established between USDA’s Natural Resource Conservation Service and the U.S. Fish and Wildlife Service as a model of effective species conservation on private lands that can provide regulatory certainty for farmers, ranchers, and landowners. The Managers support the regulatory predictability that the model of conservation provides to producers who voluntarily implement agreed upon conservation practices that promote species recovery.”

Many provisions within the Forestry Title are also relevant for conservation, and disagreements within this title were some of the final areas of negotiation within the conference committee. The final agreement did not include a number of forest management categorical exclusions from the National Environmental Policy Act as well as salvage timber removal provisions that were included within the House bill. The conferees did maintain language from the Senate-passed bill that would allow for a categorical exclusion on projects up to 4,500 acres “for certain forest management activities with the primary purpose of protecting, restoring, or improving habitat for the greater sage-grouse or mule deer.”

“This provision will ensure that projects such as conifer removal, native vegetation restoration after natural disturbance, and management of invasive species can move forward more quickly,” Mule Deer Foundation President/CEO Miles Moretti noted. “MDF and our partners have been actively engaged on these types of projects across the West, and these efforts are proving to have a tremendous positive impact on mule deer, sage-grouse and other species dependent on sagebrush rangelands.”

The bill reauthorizes hazardous fuel reduction on federal lands at $660 million annually, $100 million less per year than the previous Farm Bill, and promotes cross-boundary wildfire mitigation. In addition, the managers’ explanatory statement notes that, “The Managers recognize the risks of catastrophic wildfire to life, property, and infrastructure and have consequently provided several new authorities, including this authority to promote cross-boundary wildfire mitigation, to the Forest Service to address the threat of wildfire and promote restoration of Federal and non-Federal land.” The managers also agreed and added on to a House provision that requires an annual report on “the number of acres treated for wildfire, insect infestation, or disease prevention, the number of acres categorized as high risk, total timber production, average fire intensity of wildfires and federal response time for each fire greater than 25,000 acres.”

Completion of a 2018 Farm Bill ensures that important conservation efforts of private and public lands can continue over the next five years. While all final legislative packages include compromises in policy, the general consensus is that the Farm Bill is a positive step for conservation.

“The Agricultural Improvement Act of 2018 is a win for the American farmer and the conservation of our country’s private lands,” commented The Nature Conservancy’s director of U.S. government relations, Kameran Onley. “The bill’s much-needed boosts in funding for priority conservation programs, combined with important forestry provisions, will give farmers, ranchers, and forest landowners the tools to protect and conserve their land and their way of life. Lawmakers should be commended for their work to reach a compromise that will help keep our farms and rural communities productive and sustainable.”