Largest Deer Study on the Move in Kansas

Largest Deer Study on the Move in Kansas

Declining populations of mule deer and other species in Kansas and the Great Plains are of concern to state fish and wildlife management agencies. Researchers at the USGS Kansas Cooperative Fish and Wildlife Research Unit are tracking white-tailed deer and mule deer to understand how the deer are moving throughout the state. The information is important for hunting, disease control, and farming. Mule deer populations in Kansas are declining and contracting to the west while populations of white-tailed deer are increasing and expanding. Limited research is available to understand why two similar species are exhibiting vastly different population trends. 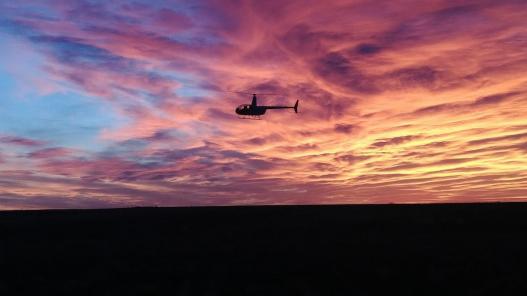 “We’re trying to answer bigger picture questions about deer in Kansas and the Great Plains, too,” said Drew Ricketts, project co-leader and assistant professor of wildlife and outdoor enterprise management. “We are collecting data from the adults and fawns of both species and that will help manage habitats for the different species.”

“We’re trying to understand if there are any interactions between the two deer species or if it’s mostly changes in landscape or habitat that are causing these trends,” said David Haukos, project co-leader and associate professor of biology.

The study involves more than 100,000 acres of private land in 10 counties in northwestern Kansas. It is a three-year project with funding from the Kansas Department of Wildlife, Parks and Tourism; the Kansas Cooperative Fish and Wildlife Research Unit; the Mule Deer Foundation; and smaller conservation groups.

The researchers tagged more than 130 does, bucks, and fawns during the spring 2018 breeding season. The researchers took deer measurements, including blood, hoof size, weight, and leg length, as well as habitat measurements, including nearby vegetation and grass height. They also marked each deer with a GPS satellite collar, which creates a record of where the deer has traveled and shows if the animal spends more time in grassland or forested areas.

Early data analysis has revealed a surprising result: More does are giving birth to fawns in open areas, such as wheat fields, with little cover. The researchers are not sure why the change is happening, but they want to find out more by continuing to track deer and analyze data.

“These deer are important to the economy of the state and to the agricultural areas in western Kansas,” Haukos said. “This is just a start in terms of understanding deer ecology, management, and conservation in Kansas.”

Author
Jennifer Tidball, Kansas State University - excerpted from Life in the wild: Why scientist study ecosystems and the wildlife within them
|
Photo Credit
Kansas Cooperative Fish and Wildlife Research Unit
|