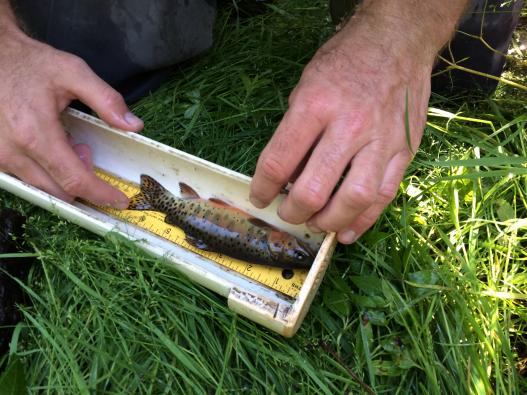 Found only in the scenic headwaters of pristine mountain streams in the Colorado and New Mexico Rockies, the Rio Grande cutthroat trout is a prized catch among native fish enthusiasts. The brilliantly-colored trout, the official state fish of New Mexico, is beautiful and tenacious, a one-of-a-kind fishing experience. It has inspired its own craft beer, a local fish-drink-run “flyathlon”, and a dedicated group of fishermen, scientists, and land managers committed to its conservation.

Inspired by fishing reports that the subspecies wasn’t in places it was supposed to be, a team of researchers led by Colleen Caldwell, Unit Leader at the New Mexico CRU Unit, and CASC research fish biologist Abby Lynch is investigating threats to native trout populations.

With funding from the National and South Central CASCs and support from partners at the New Mexico Department of Game and Fish, the U.S. Forest Service, the Bureau of Land Management, the U.S. Fish and Wildlife Service, five Tribal Nations and Puebloans, and local fishermen, the team has set out to understand how two stressors – climate change and invasive species – are combining to give the Rio Grande cutthroat trout a one-two punch.

In 2015 and 2016, the Rio Grande river basin experienced a drought so severe that meteorologists had to invent a new level of the Palmer Drought Index. Small, fragmented streams across the watershed dried up, taking native trout with them. The trout that survived – those who found intermediate pools to shelter in, or whose rivers didn’t quite disappear – were left experiencing different stream conditions than they were used to.

This inspired a USGS study led by Brock Huntsman, then a postdoctoral researcher at the New Mexico CRU, on the effects of drought-induced stream conditions on the survival and growth of Rio Grande cutthroat trout. The researchers found that the trout’s growth rate and life history traits adjusted to a variety of stream conditions, including low stream flows and higher water temperatures seen during droughts. They hypothesize that this is the result of the subspecies’ long evolutionary history at the variable outer edges of cutthroat trout’s geographic range. Yet hotter, drier, and longer droughts from climate change are driving Rio Grande cutthroat trout higher and higher into the cold mountain streams, a pattern that could eventually leave the fish with nowhere else to go.

The team then investigated reports of invasive brown trout taking over Rio Grande cutthroat trout habitats. In a project led by former New Mexico State University graduate student Lauren Flynn, researchers compared streams with and without the invasive species, looking for differences in diet, growth rate, and population density of the native fish. Although they did not find evidence that brown trout eat Rio Grande cutthroat trout (contradicting local theories), the team discovered that the larger, more aggressive brown trout outcompete native trout for food. Native trout living in invaded streams were smaller in size, had smaller populations, and fed off less-nutritious insects left over from brown trout meals. Building on their earlier drought work, the team further concluded that climate change could facilitate future brown trout invasions, as brown trout have higher tolerances to warm water than the native trout do.

This research has contributed to a network of conservation projects and partners dedicated to preserving the Rio Grande cutthroat trout and its natural habitats. These collaborations have already aided the recovery of native fish populations across New Mexico and Colorado through initiatives such as removing invasive species from pristine streams and building barriers to prevent reintroductions. The network is now turning its attention to restoring degraded stream habitats to help rehabilitate native trout populations.

Moving forward, Caldwell, Lynch, and their teams are continuing to explore how changing stream conditions affect native trout. As part of this work, they are partnering with local fishermen to place stream flow monitors in favorite fishing spots. They hope that working with these “natural scientists” will lead to new insights that will further aid conservation of the beloved Rio Grande cutthroat trout.

The ONB features articles from U.S. Geological Survey Cooperative Fish and Wildlife Research Units across the country. The Units are leading exciting, new fish and wildlife research projects that we believe our readers will appreciate reading about. This story was written by Jordan Bush, Science Communications Specialist, USGS National Climate Adaptation Science Center.