The Boone and Crockett Club and Wildlife Management Institute have been working together on the Poach & Pay Program, a collaborative effort to assess and address the level of illegal take of wildlife. Initial research started in 2016 examined and reviewed state restitution systems for illegal take of big game species and found that the judicial systems were the primary obstacle for successfully convicting and punishing poachers. In December 2020, the groups announced the next phase of the Poach & Pay efforts to complete comprehensive estimate of the rates of undetected, unreported, and unresolved wildlife crimes in an effort to determine the true impacts to conservation and the public trust agencies. This research got underway in late 2021, with early results showing how hunters perceive poaching in their states.

Past research into the “dark figure” (undetected level) of wildlife crime, provides estimates that are questionable. As with any “victimless” crime, accurately estimating the number of undetected and unreported crimes is an arduous process. However, this information is critical to fully understanding the fiscal and conservation impacts that wildlife crimes have on conservation, hunters, and state trust agencies. Impacts of wildlife crimes are also important to understand, not only for the biological functions, but also from the experiential and social impacts to both hunters and the non-hunting public. By determining hunter perceptions of these impacts, we hope to further determine the true costs and impacts that these crimes have on wildlife populations, hunter experiences, and non-hunter perceptions.

In Phase 1 of the study, we distributed surveys to 80,000 resident hunters from eight subject states (10,000 per state). Questions focused on determining hunter perceptions of the biological, experiential, and social impacts of poaching, as well as determining the degree to which wildlife violations go undetected and/or unreported. The eight states were chosen to maximize variability in location, urban/rural makeup, percent of public vs. private lands, species composition, and accessibility and quality of data. The states included in the study were Maine, Michigan, Missouri, Nevada, North Carolina, Ohio, Oregon, and Pennsylvania. States were also grouped regionally for analysis, with Oregon and Nevada representing the West, Ohio and Michigan representing the Midwest, Pennsylvania and Maine representing the Northeast, and Missouri and North Carolina representing the Southeast.

Hunters were surveyed extensively as a part of this research project for several reasons. Importantly, law-abiding hunters are primarily the “paying” customers of the state trust agencies charged with wildlife management, and therefore are the primary funding source for conservation in the U.S. By their actions, hunters also likely have a vested interest and understanding of the subject matter surrounding wildlife crimes. The activities of hunters also place them in situations (hunting, scouting, etc.) that likely allows them to be familiar with the timing and circumstances (when and where) associated with illegal wildlife activities.

To geographically determine the level of concern of hunters have for poaching activities, respondents were asked their opinions on the impacts of wildlife crimes at a spatial scale, specifically focusing on illegal take at the local, state, and national levels. Questions were asked at various scales ranging from the most local to the most comprehensive. These results are depicted in Figures 1-4, respectively. Different letter subscripts in all figures indicate a difference within response category (level of seriousness) at the a£ 0.05 level. 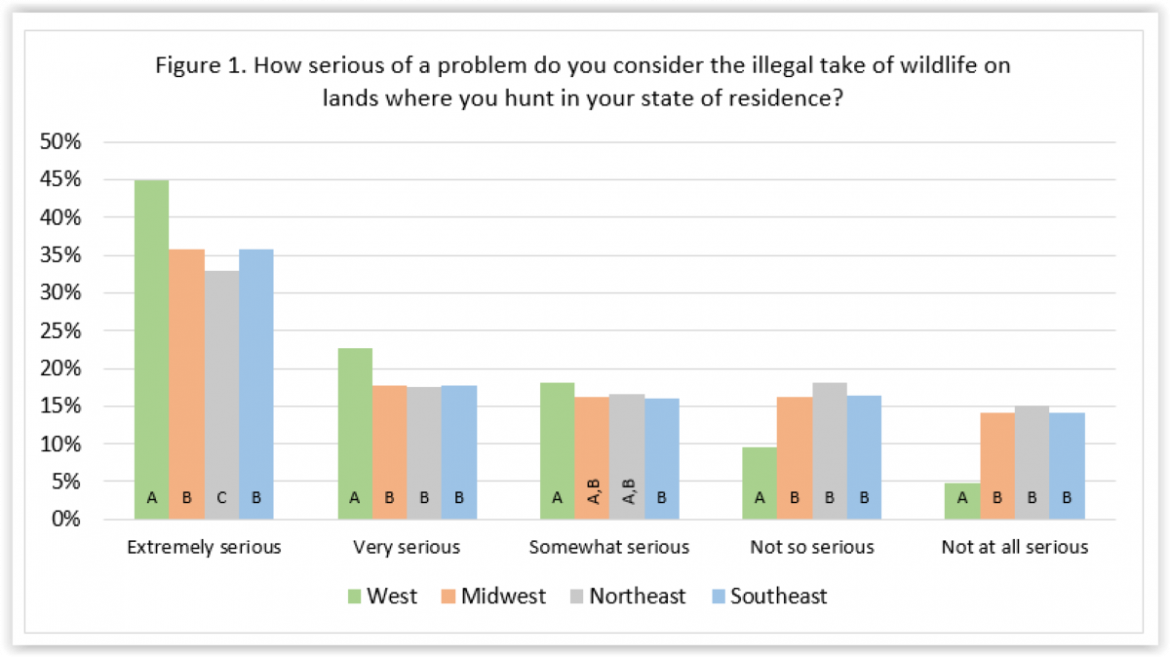 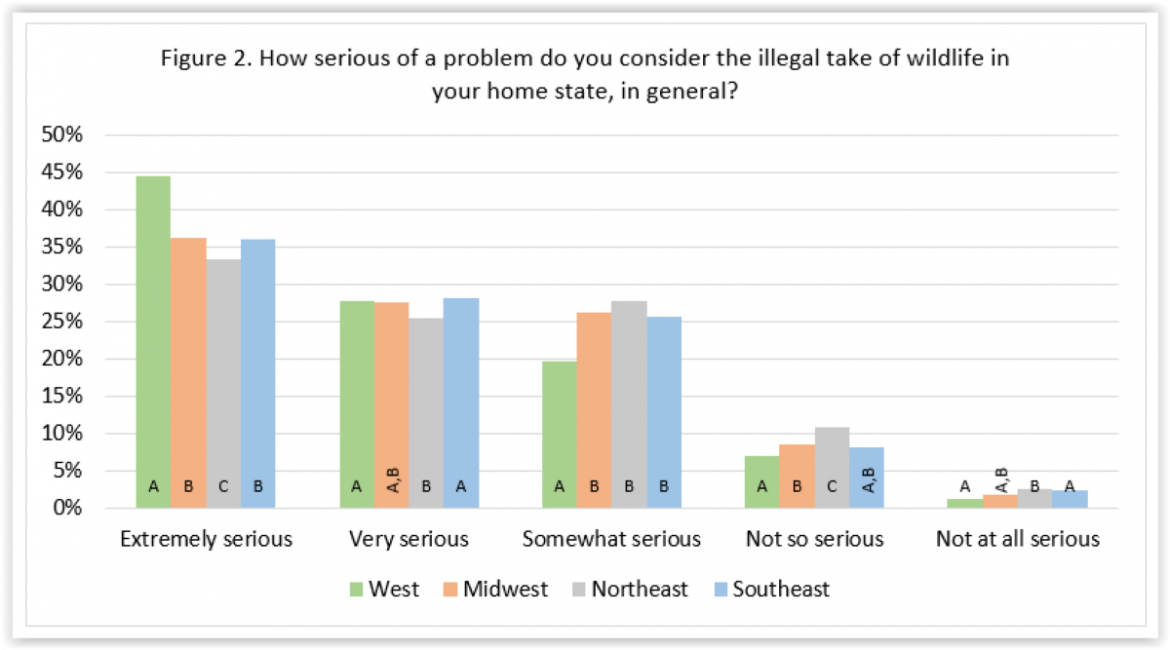 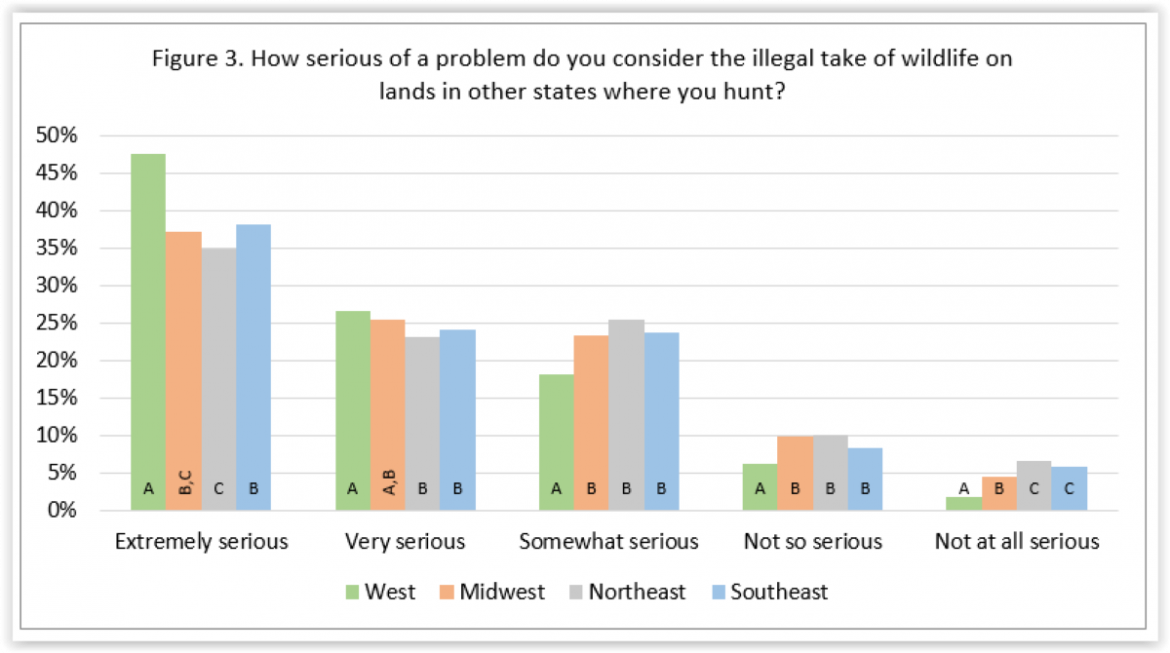 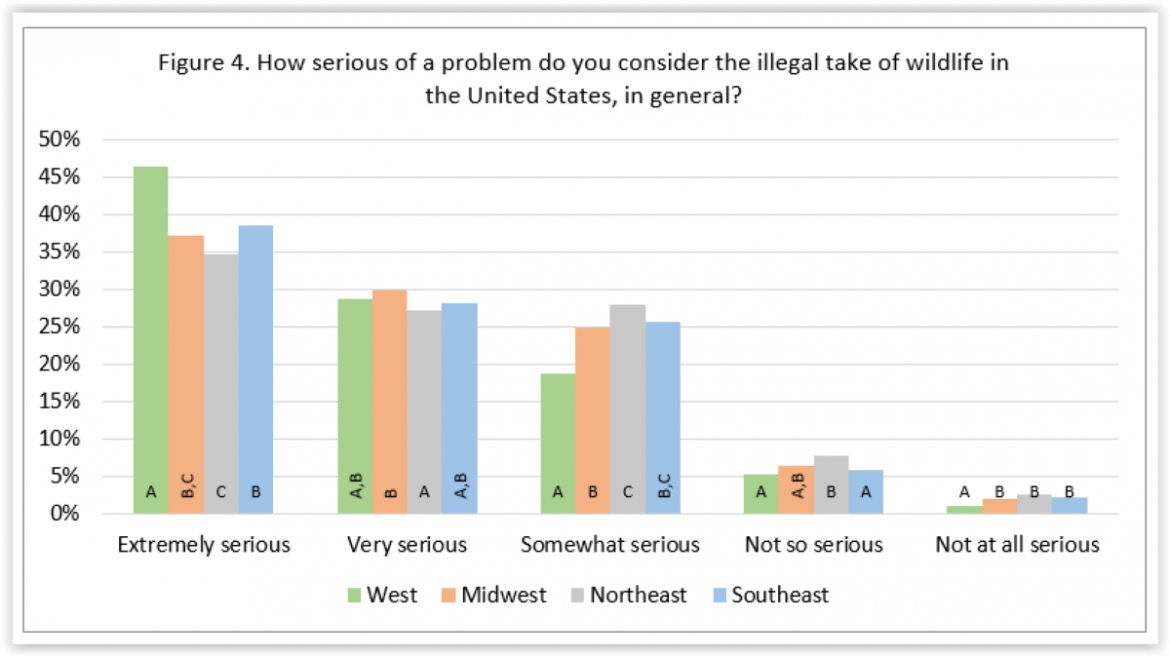 To evaluate hunter perceptions on the biological, experiential, and social impacts of illegal take, respondents were asked their opinions on several additional factors. Questions were designed to identify concerns with wildlife population levels, hunt quality, hunting opportunity, access to lands, hunter self-perception, and public perception. The responses to these six factors are depicted in Figures 5-10, respectively. Different letter subscripts in all figures indicate a difference within response category (level of agreement) at the a£ 0.05 level.

Approximately 60-70% of respondents from all regions moderately or strongly agreed that there are significant negative biological, experiential, and social impacts associated with the illegal take of wildlife. The exception is seen in Figure 8, where approximately 30-40% of hunters selected moderately or strongly agree on the issue of perception of self as impacted by illegal take. As seen in the geographic scale analysis, hunters in the West felt that each of these impacts were significantly greater (in the strongly agree response) than hunters in other regions, with the one exception being access to lands for hunting, where the western region responses were not different from the northeast and southeast regions (Figure 8). For all categories except for access to lands for hunting, the Northeast indicated that they strongly agree with the negative impacts at a significantly lower level than hunters from the other regions. 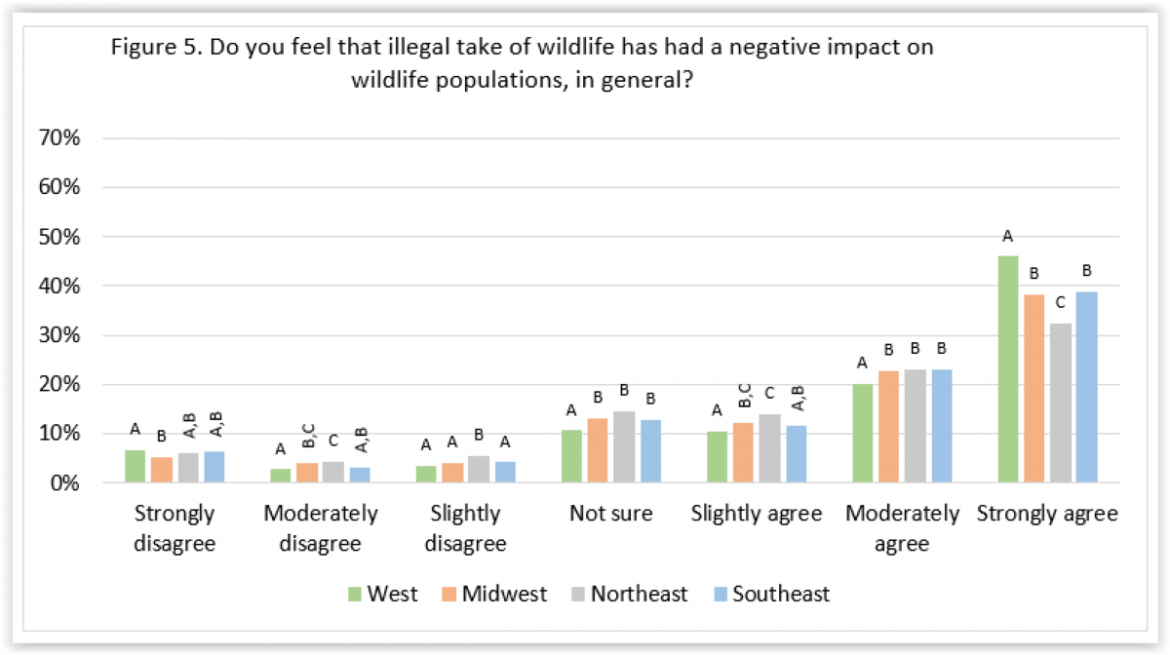 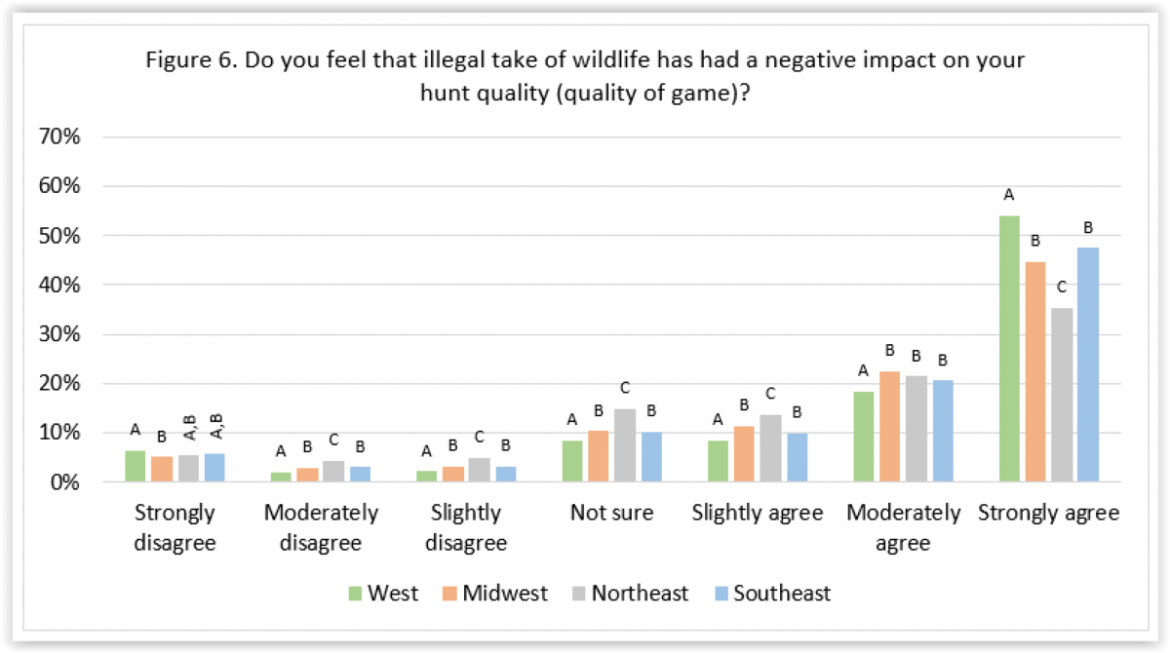 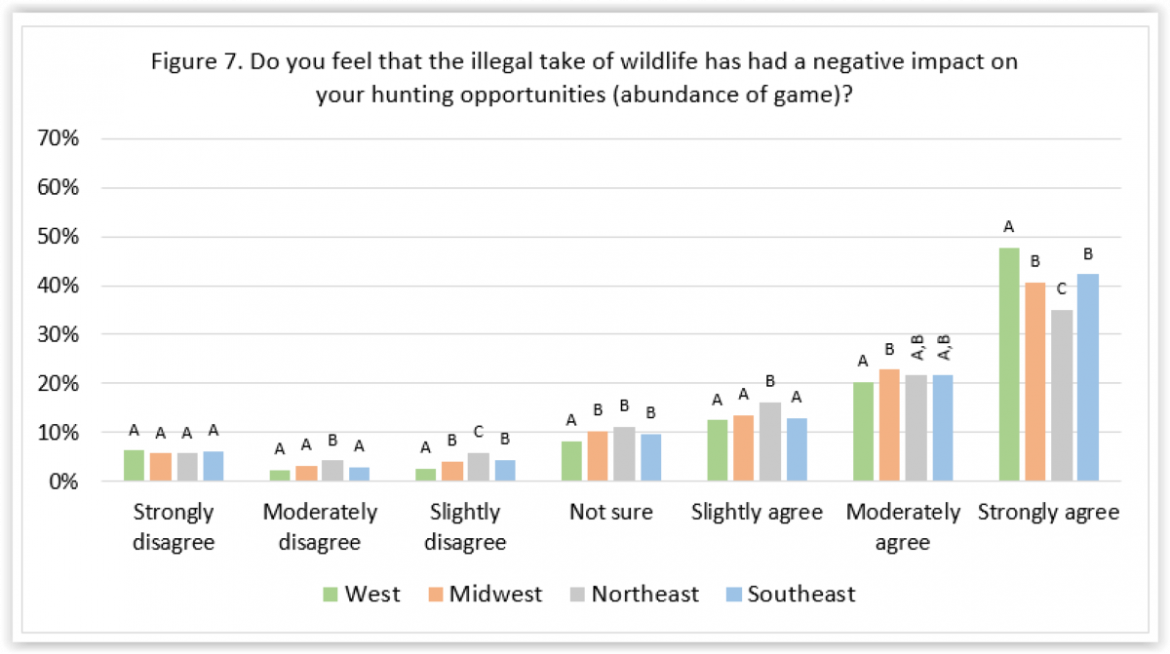 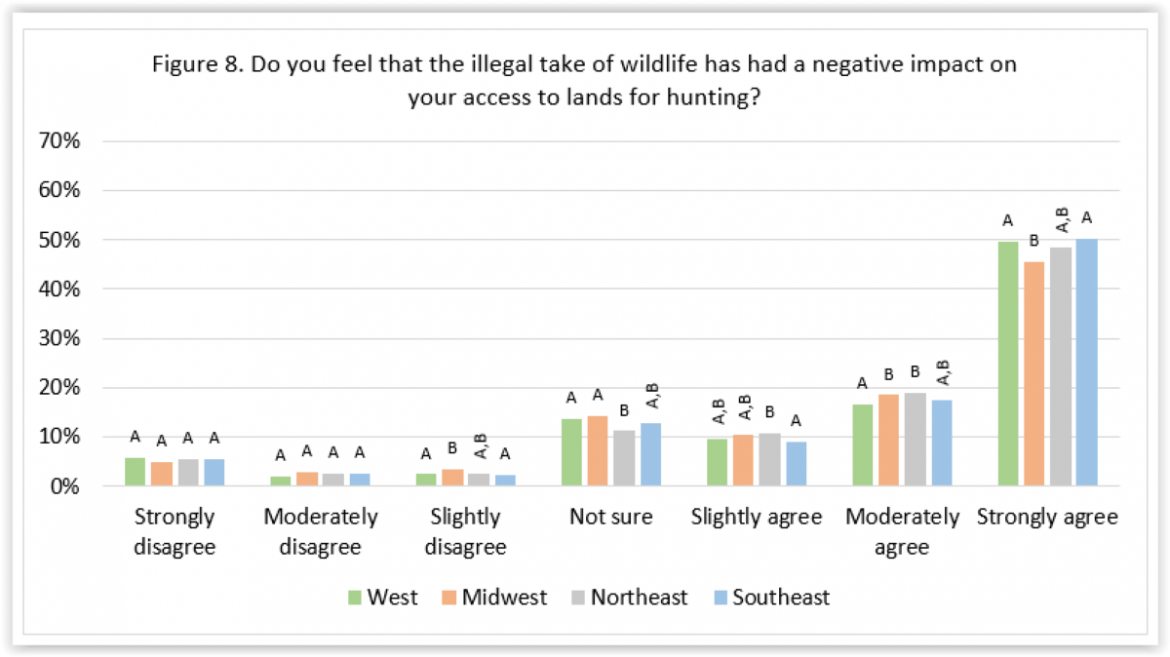 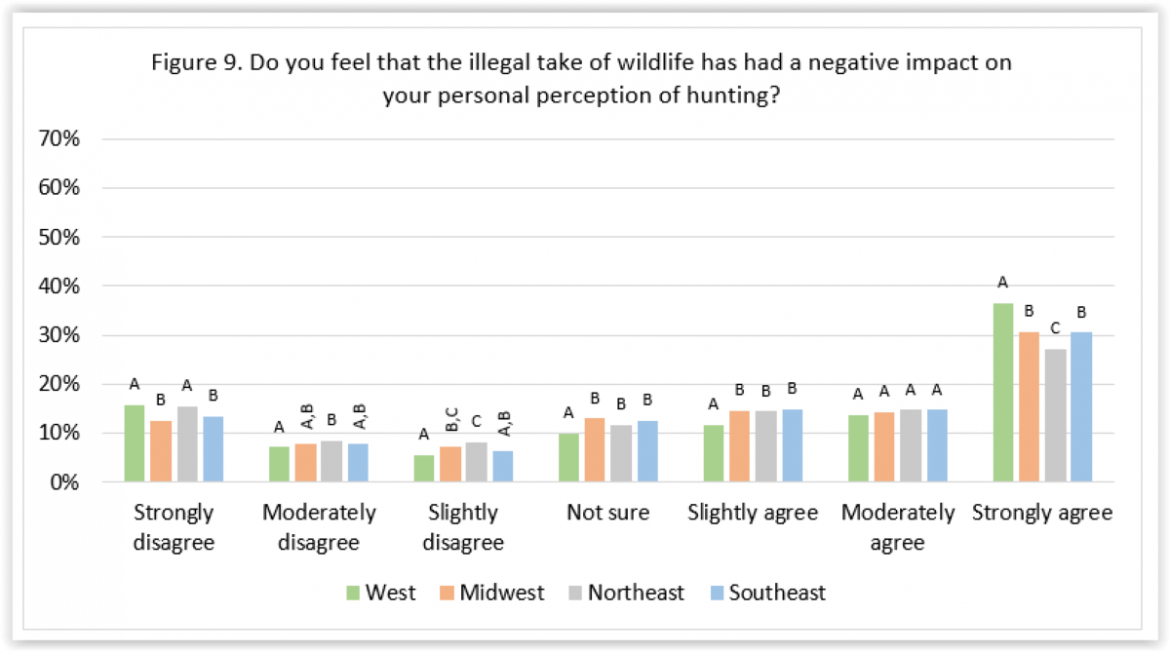 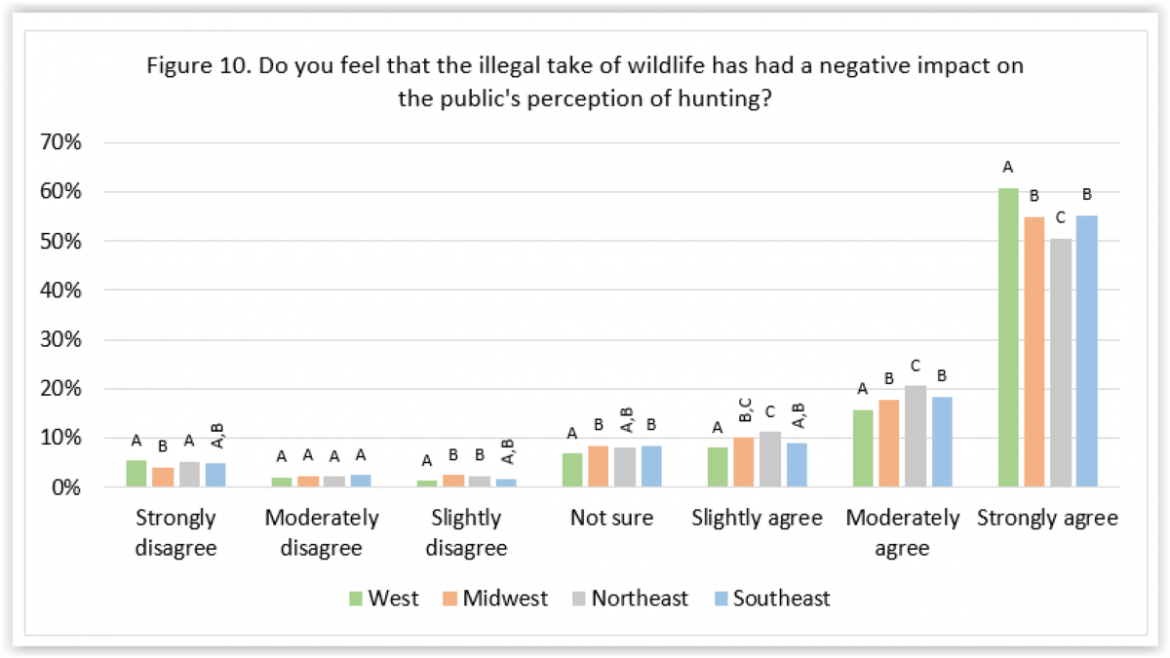 The initial review of the hunter survey data for the eight subject states indicated that hunters generally feel that illegal take of wildlife has negative impacts at the local, state, regional, and national levels. For states in the West, this concern was significantly higher than for other regions. While there are several possibilities from which this difference might arise, we suspect that it is due to the perceived or real scarcity of opportunities in most western states. For example, most western states have a quota system for big game species, which may result in hunters having to wait one or more years in between hunting opportunities. Conversely, many states in the other regions offer at least some big game opportunities to be purchased over the counter, so hunters can participate each year. This inability to consistently participate on an annual basis may cause 1) law-abiding hunters to be more aware of the impacts of illegal take may have on their personal experience, and 2) persons that become frustrated with their drawing success rates may resort to taking wildlife illegally rather than wait their turn.

To many, poaching of wildlife may seem to be inconsequential to the many abundant wildlife populations spread across North America. However, both the removal of animals beyond what is biologically justifiable, as well as the removal of high quality “breeder” animals by illegal means may have significant biological impacts. The hunters surveyed indicated that they strongly agree that poaching has a detrimental biological impact. Likewise, the quality of the hunting experience, in the form of quality of game, abundance of game, availability of hunting lands are all concerns voiced by the hunters in this survey, with the majority moderately or strongly agreeing that poaching has a detrimental impact on these factors.

Finally, the social impacts that result in poaching activities cannot be overstated. While hunters have some concerns about self-perception, they are much more concerned about how the non-hunting public views these illegal actions. Law-abiding hunters are frequently targeted by anti-hunting organizations, but a greater concern is the inability of the non-hunting public to differentiate between lawful, regulated hunting and poaching.

In conclusion, a comprehensive study on wildlife poaching is long overdue. Proximally, success will be determined by our ability to provide the trust agencies with accurate information with which to better perform their jobs. But ultimately, success will be measured by the ability of those agencies to use this information to reduce the levels of wildlife poaching thru targeted actions, increased awareness of the true costs of wildlife crimes, and lowering the level of social acceptance of these crimes. It is our hope that this study will help agencies to do just that.